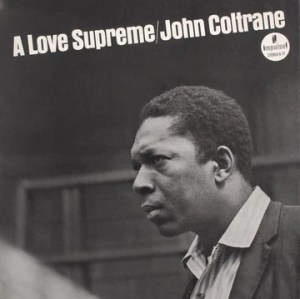 For this album, having sampled a large group of pressings from every era, we found the originals to be inferior to the best reissues we played. Naturally the ones we offer here as Hot Stampers will be the best of those reissue pressings. We are not the least bit worried that this vintage Impulse LP won’t beat the pants off of any original as well as any reissue you may have heard. And of course it is guaranteed to be dramatically better sounding than any Heavy Vinyl pressing produced by anyone, anywhere, at any time.

This record is ALIVE! When you hear a record like this, you don’t need to play the 180 gram reissue to know that an early pressing such as this one is just going to murder it.

If you know anything about this music, you know that Coltrane is blasting away here and it is a thrill to hear him playing with such passion to be sure.

The clarity you will hear on this pressing does not come at the expense of brightness or thinness of any kind. In fact, just the opposite is the case, the sound is so rich and tubey you will be practically bowled over by it.

If you’re looking to demonstrate just how good an All Tube Analog recording from 1965 can be, this killer copy will do the trick.

Talk about Tubey Magic, the liquidity of the sound here is positively uncanny. This is vintage analog at its best, so full-bodied and relaxed you’ll wonder how it ever came to be that anyone seriously contemplated trying to improve it.

This IS the sound of Tubey Magic. No recordings will ever be made like this again, and no CD will ever capture what is in the grooves of this record. There is of course a CD of this album, but those of us who possess a working turntable and a good collection of vintage vinyl could care less.

Having done this for so long, we understand and appreciate that rich, full, solid, Tubey Magical sound is key to the presentation of this music. We rate these qualities higher than others we might be listening for (e.g., bass definition, soundstage, depth, etc.). The music is not so much about the details in the recording, but rather in trying to recreate a solid, palpable, real John Coltrane live in your listening room. The best copies have an uncanny way of doing just that.

What We’re Listening For On A Love Supreme

One of the most important records ever made, John Coltrane’s A Love Supreme was his pinnacle studio outing, that at once compiled all of the innovations from his past, spoke to the current of deep spirituality that liberated him from addictions to drugs and alcohol, and glimpsed at the future innovations of his final two and a half years.

Recorded over two days in December 1964, Trane’s classic quartet–Elvin Jones, McCoy Tyner, and Jimmy Garrison– stepped into the studio and created one of the most the most thought-provoking, concise, and technically pleasing albums of their bountiful relationship. From the undulatory (and classic) bassline at the intro to the last breathy notes, Trane is at the peak of his logical and emotionally varied soloing, while the rest of the group is completely atttuned to his spiritual vibe.

Composed of four parts, each has a thematic progression. “Acknowledgement” is the awakening to a spiritual life from the darkness of the world; it trails off with the saxophonist chanting the suite’s title. “Resolution” is an amazingly beautiful, somewhat turbulent segment. It portrays the dedication required for discovery on the path toward spiritual understanding. “Pursuance” searches deeply for that experience, while “Psalm” portrays that discovery and the realization of enlightenment with humility.

Although sometimes aggressive and dissonant, this isn’t Coltrane at his most furious or adventurous. His recordings following this period–studio and live– become progressively untethered and extremely spirited. A Love Supreme not only attempts but realizes the ambitious undertaking of Coltrane’s concept; his emotional, searching, sometimes prayerful journey is made abundantly clear. Clocking in at 33 minutes; A Love Supreme conveys much without overstatement. It is almost impossible to imagine any jazz collection without it.