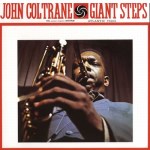 Mastered by Kevin Gray, this record has what we like to call ”modern” sound, which is to say it’s clean and tonally correct for the most part, but it’s missing the Tubey Magic the originals and the good reissues both have plenty of.

In other words, it sounds too much like a CD.

Any properly-mastered, properly-pressed ’70s copy on the red and green label will be richer, fuller, sweeter, and just plain more enjoyable than this 180 gram version. It’s below average, which means it merits a D.

That said, “Giant Steps” is not an easy record to find in good condition, because any serious jazz lover would have played it plenty. It is inarguably one of John Coltrane’s greatest achievements.

Rhino Records has really made a mockery of the analog medium. Rhino touts their releases as being pressed on “180 gram High Performance Vinyl”. However, if they are using performance to refer to sound quality, we have found the performance of their vinyl to be unsatisfactory, with sound quality substantially lower than the average copy one might stumble upon in the used record bins.

Giant Steps bore the double-edged sword of furthering the cause of the music as well as delivering it to an increasingly mainstream audience. Although this was John Coltrane’s debut for Atlantic, he was concurrently performing and recording with Miles Davis… He was, in essence, beginning to rewrite the jazz canon with material that would be centered on solos — the 180-degree antithesis of the art form up to that point. These arrangements would create a place for the solo to become infinitely more compelling. This would culminate in a frenetic performance style that noted jazz journalist Ira Gitler accurately dubbed “sheets of sound.” Coltrane’s polytonal torrents extricate the amicable and otherwise cordial solos that had begun decaying the very exigency of the genre — turning it into the equivalent of easy listening.