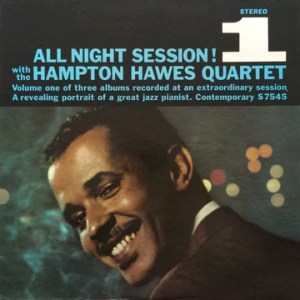 What The Best Sides Of All Night Session, Vol. 1 Have To Offer Is Not Hard To Hear

What We’re Listening For On All Night Session, Vol. 1

On the night of November 12 and into the morning of November 13, 1956, a quartet led by pianist Hampton Hawes recorded enough material to fill three long-playing phonograph record albums. This studio session contained many elements associated with a live gig: the work took place during regular nightclub performing hours, the improvisations were mostly extended, and there were no alternate takes. A remarkable freshness and spontaneity prevailed throughout the session. Although controversy continues regarding the original sequence of titles, Duke Jordan’s “Jordu” and Dizzy Gillespie’s “Groovin’ High” are superb openers for this first of three volumes. In addition to an invigorating run down “Broadway,” Hawes improvised two original themes: “Takin’ Care” and a bluesy walk entitled “Hampton’s Pulpit” that stretched out for more than 11 minutes, making it the longest track of the entire all-night session. Collaborating with the pianist on this historic date were guitarist Jim Hall, bassist Red Mitchell, and drummer Eldridge “Bruz” Freeman. The interplay between these four men is marvelous, particularly when heard with headphones or through a sound system allowing for a full appreciation of the stereophonic balance achieved by the recording engineers.

In 1958 Hawes was quoted as saying, “It’s hard to put into words how good it feels to play jazz when it’s really swinging…I’ve reached a point where the music fills you up so much emotionally that you feel like shouting hallelujah — like people do in church when they’re converted to God. That’s the way I was feeling the night we recorded All Night Session!”