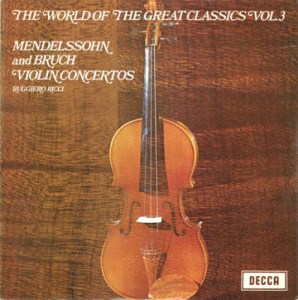 This is one of the ALL TIME GREAT violin concerto records. In Ruggiero Ricci’s hands both works are nothing short of magical. If you want to know why people drool over Golden Age recordings, listen to the violin. Careful, when you hear it you may find yourself drooling too.

It’s practically impossible to hear that kind of string sound on any recording made in the last thirty years (and this, of course, includes everything pressed on Heavy Vinyl). It may be a lost art but as long as we have these wonderful vintage pressings to play, it’s an art that is not lost on us.

VTA and the Violin

This is truly The Perfect Turntable setup disc. When your VTA, azimuth, tracking weight and anti-skate are correct, this is the record that will make it clear to you that your efforts have paid off.

And you can’t really know how right it can sound until you go through hours of experimentation with all the forces that affect the way the needle rides the groove. Without precise VTA adjustment there is almost no way this record will do everything it’s capable of doing. There will be hardness, smear, sourness, thinness — something will be off somewhere. With total control over your arm and cartridge setup, these problems will all but vanish. (Depending on the quality of the equipment of course.)

We harp on all aspects of reproduction for a reason. When you have done the work, records like this sound GLORIOUS.

A Must Own Pair of Concertos

These wonderful violin concertos — two of the greatest ever composed — should be part of any serious Classical Collection.

Bruch: Concerto No. 1 in G Minor

During the summer of 1838, Felix Mendelssohn wrote to his longtime friend and collaborator Ferdinand David: “I should like to write a violin concerto for you next winter. One in E minor runs through my head, the beginning of which gives me no peace.” Indeed, it would not give him peace for another six years, when he at last found time and inspiration amidst his busy concert schedule to complete it. He consulted David regularly throughout the composition process regarding violin technique and, ever the perfectionist, continued to make minor adjustments to the concerto unto its premiere in Leipzig on March 13, 1845. Composed at the height of Mendelssohn’s brilliant career, the concerto became an instant classic and remains one of the cornerstones of the repertoire.

The first movement, marked Allegro molto appassionato (Fast and very passionate), begins with a haunting melody that was likely the one Mendelssohn first imagined in 1838:

It easily conjures up the drama of misty heaths featured in contemporary novels by Sir Walter Scott and the Brönte sisters. The melody builds to a tempestuous transitional passage that subsides to reveal a new theme. Flutes and clarinets introduce this gentle, lyrical melody while the soloist plays a long pedal note on the violin’s lowest string. The violin then plays the melody, leading to a developmental passage.

The movement’s climax reveals one of Mendelssohn’s unique traits; while most composers create intensity with a fortissimo, Mendelssohn often makes the most crucial moments of his pieces the quietest. In this concerto, the development leads to a passage in which the violinist is completely alone. Normally, this extended solo (called a cadenza) appears at the end of a movement, but Mendelssohn placed it at the climactic turning point just after the middle. This innovation would inspire many later composers to do the same (Tchaikovsky, Sibelius and Rachmaninoff provide a few examples). Amid the soloist’s rapid string crossings, the haunting opening theme reappears in the orchestra. After the gentle second theme returns, the movement ends with a stormy coda.

Eager to create musical continuity throughout the concerto, Mendelssohn composed passages that link one movement to another without pause. As soon as the orchestra plays the final chord of the first movement, a bassoon leads a magical transition to the tranquil world of the slow second movement. The soloist then plays what many have described as a beautiful song without words, offering respite from the drama of the first movement. A contrasting, passionate melody appears in the middle of the movement, but ultimately the calm of the opening melody prevails.

The second movement transitions to the finale with a passage that at first evokes the moody atmosphere of the first movement. The soloist poses a series of musical questions which it answers along with the orchestra. Any clouds, however, are soon dispersed by playful brass fanfares that lead to a sunny, puckish theme for the soloist. Ever since he composed his Overture to A Midsummer Night’s Dream at 17, Mendelssohn had made this kind of scherzando, gossamer-textured “fairy music” a hallmark of his style. This main theme becomes the basis of a rondo, a musical form in which one main theme alternates with contrasting episodes. In the first such episode, a complimentary theme in B major is introduced by the orchestra. After the main theme returns, the soloist introduces a broader, contrasting melody. Mendelssohn reveals it to be an ingenious countertheme of the movement’s main melody when the violin and strings play them simultaneously. The complimentary theme returns in E major immediately afterward, leading to a final statement of the main theme and a thrilling coda.