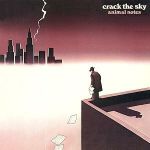 Records with Huge Choruses that Are Good for Testing

The best vintage rock recordings usually have something going for them that few recordings made after the ’70s do: their choruses get big and loud, yet stay smooth, natural and uncongested.

We’ve mentioned it in countless listings. So many records have — to one degree or another — harsh, hard, gritty, shrill, congested choruses. When the choruses get loud they become unpleasant, and here at Better Records you lose a lot of points when that happens.

This recording, more specifically this pressing of this recording, has exceptionally big, smooth and natural choruses for many of the songs. Rangers at Midnight comes to mind immediately. Credit our man Shelly Yakus below for really getting the choruses right on this album.

Fun tip: Listen for the Elton John-like piano chords on the first track. Can you name that song? (Hint: it’s on Tumbleweed Connection.)

Shelly Yakus and Andy Abrams are credited with engineering the album at the legendary Record Plant in New York.

Yakus is the man behind Tom Petty’s best sounding album, Damn the Torpedoes, an album I expect with join our Top 100 with the next updating. We played a copy of the album in 2014 that really blew my mind; the sound was shocking in its size, power and punch; it was dramatically better than any other Petty record I’d ever played up to that time. (Hard Promises, another Yakus effort, can almost get there but not quite, at least not yet, not on the twenty or so copies I’ve played. Who knows, that one-of-a-kind pressing may just be around the corner, waiting to be discovered in our next shootout. We’ll keep you posted.)

The orchestra (yes, of course there’s an orchestra!) was recorded at the fabled 30th Street Studios; no wonder it sounds so good.

I freely admit this band is not for everybody. AMG is correct that the album is not exactly sweetness and light. Of course Dark Side of the Moon isn’t exactly a treatise on positive thinking either. It seems to have held up rather well.

If after listening to the album you feel Crack the Sky is not to your liking feel free to send it back for a full refund. We want you to be happy with every Hot Stamper purchase you make. Every one is guaranteed to satisfy or we gladly take it back, no questions asked.

Virgin… No
Invaders from Mars
Play On
Rangers at Midnight
i. Night Patrol
ii. Let’s Lift Our Hearts Up

Coming as it did after Crack the Sky’s critically acclaimed first album, the darker, more cynical Animal Notes was something of a shock. The grim lyrics are still expressed with a dash of humor, but on the first four songs, the laughs are through clenched teeth.

“We Want Mine,” the opening cut, is a demand from a third-world native for a share of the world’s wealth, a demand he knows will be ignored. “Animal Skins,” which may be the best track on the album, skewers organized religion with bitter wit, and “Maybe I Can Fool Everybody Tonight” is told from the viewpoint of someone who is sure that his success is undeserved.