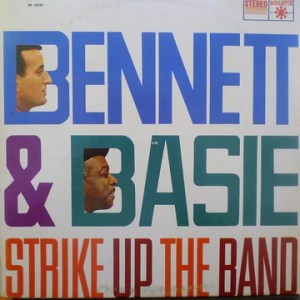 This vintage Roulette pressing has the kind of Tubey Magical Midrange that modern records can barely BEGIN to reproduce. Folks, that sound is gone and it sure isn’t showing signs of coming back. If you love hearing INTO a recording, actually being able to “see” the performers, and feeling as if you are sitting in the studio with the band, this is the record for you. It’s what vintage all analog recordings are known for — this sound.

What We’re Listening For On Strike Up The Band

Tony Bennett recorded two albums with Count Basie and His Orchestra under a contractual agreement giving one of the records to Bennett’s label, Columbia, and the other to Basie’s, Roulette. The Columbia album, In Person!, was released once, while the Roulette album, initially issued under the title Strike Up The Band, has been re-released by various labels under various titles endlessly. This is one of those reissues, and while one may deplore the duplicitous marketing scheme, the pairing between Bennett and Basie remains impressive.

The band raves through tunes like “With Plenty Of Money And You,” and Bennett matches them, drawing strength from the bravura arrangements, while band and singer achieve a knowing tenderness on “Growing Pains.” This is an album well worth owning; just make sure you don’t buy it twice.