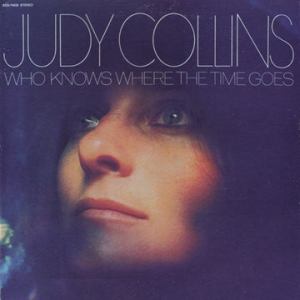 Check out the great players on this album!

Hello, Hooray
Story of Isaac
My Father
Someday Soon
Who Knows Where the Time Goes

With a cast of instrumental all-stars, folk vocalist Judy Collins creates a mini-masterwork on Who Knows Where the Times Goes. Collins’ strength as a storyteller and interpreter are at their forte throughout the disc. Likewise, she wanders upon the precipice of less traditional folk and more toward rock (“Hello Hooray”) and even country/rock (“Poor Immigrant”) — the latter of which is a cover of a Bob Dylan composition.

Additionally, her inimitable choice of material — Collins’ sole contribution being the languid ballad “My Father” — serves the disc well. This is especially true of Ian Tyson’s (of Ian & Sylvia fame) “Someday Soon,” which in time became one of Collins’ signature tunes.

However, it is her interpretations of Leonard Cohen’s “Bird on the Wire” and the biblically based “Story of Isaac” that are perhaps the most stunning. Both the laid-back pedal steel guitar work of Buddy Emmons on “Bird on a Wire” as well as the stark accompaniment of Michael Sahl’s intricate harpsichord melody on “Story of Isaac” create unique sonic imagery that mutually distinguishes as well as defines Collins’ reading from the comparatively staid originals.

However, it is “First Boy I Loved” — originally recorded by the Incredible String Band — that singularly defines the mood and timbre of Who Knows Where the Time Goes. The inherently ethereal composition is adorned by Stephen Stills’ tasty, yet restrained, fretwork that blends seamlessly with Collins’ own acoustic guitar. Together they support — without becoming overpowered by — the featured rhythm section of Jim Gordon (drums) and Chris Etheridge (bass).

Enthusiasts of Judy Collins rank this among their favorite recordings and it is likewise a perfect touchstone for the burgeoning listener as well.