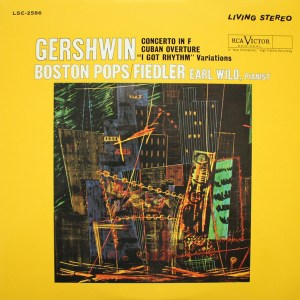 We reviewed the Classic Records pressing and had a few thoughts about string tone and texture we wanted to discuss:

I must admit Classic Records did a passable job with this one. The two things that separate the good originals from the reissue are in some ways related. Classic, as is their wont, boosted the upper midrange, and that, coupled with their transistory mastering equipment, makes the strings brighter, grainier and yet somehow lacking in texture and sheen compared to the originals (a clear sign of a low-res cutting chain).

Once you recognize that quality in the sound of a record it’s hard to ignore, and I hear it on every Classic Record I play. (This commentary has more on the subject.)

RCA is more famous for its string tone than anything else. If the strings on the Classic Records LPs don’t bother you, you can save yourself a lot of money by not buying authentic RCA pressings — and get quieter vinyl to boot.

Gershwin studied piano under Charles Hambitzer and composition with Rubin Goldmark, Henry Cowell, and Joseph Brody. He began his career as a song plugger but soon started composing Broadway theater works with his brother Ira Gershwin and with Buddy DeSylva. He moved to Paris intending to study with Nadia Boulanger, but she refused him, afraid that rigorous classical study would ruin his jazz-influenced style; Maurice Ravel voiced similar objections when Gershwin inquired on studying with him. He subsequently composed An American in Paris, returned to New York City and wrote Porgy and Bess with Ira and DuBose Heyward. Initially a commercial failure, it came to be considered one of the most important American operas of the twentieth century and an American cultural classic.

Gershwin moved to Hollywood and composed numerous film scores. He died in 1937 of a malignant brain tumor. His compositions have been adapted for use in film and television, with several becoming jazz standards recorded and covered in many variations.

With Fiedler’s direction, the Boston Pops reportedly made more recordings than any other orchestra in the world, most of them for RCA Victor, with total sales exceeding $50 million. His recordings began in July 1935 at Boston’s Symphony Hall with RCA Victor, including a world premiere recording of Jacob Gade’s “Jalousie”, which eventually sold more than a million copies, and the first complete recording of Rhapsody in Blue by George Gershwin (with Jesús María Sanromá as soloist; around that time they also made the first recording of Edward MacDowell’s Second Concerto). In 1946, he conducted the Boston Pops in one of the first American recordings devoted to excerpts from a film score, Dmitri Tiomkin’s music for the David O. Selznick Technicolor epic Duel in the Sun. RCA Victor released an album of ten-inch 78-rpm discs complete with photographs from the film.

Fiedler’s June 20, 1947, recording of Gaîté Parisienne by Jacques Offenbach was eventually released by RCA as their first long-playing classical album (RCA Victor LM-1001), in 1950. He recorded the same music in 1954 in stereo and began making regular stereo recordings in 1956. A number of Fiedler’s recordings were released as 45-rpm “extended play” discs, beginning in 1949, such as Tchaikovsky’s Marche Slave and Ketèlbey’s In a Persian Market (RCA Victor ERA-2). Besides recording light classics, Fiedler also recorded music from Broadway shows and Hollywood film scores, as well as arrangements of popular music, especially the Beatles. He and the Boston Pops occasionally recorded classical works that were favorites, but not considered as “light” as most of the pieces that he conducted. He made but a single recording with the Boston Symphony Orchestra: Dvorak’s New World Symphony. There were also recordings of chamber music by his Sinfonietta. Fiedler and the Boston Pops recorded exclusively for RCA Victor until 1970 (though the label has continued to issue many new Fiedler/Boston Pops compilations and unreleased recordings), when they switched to Deutsche Grammophon for classical releases with co-owned Polydor Records for his arrangements of pop music compositions and then London Records. His last album, devoted to disco, was titled Saturday Night Fiedler.