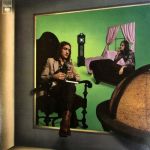 More of the Music of Dave Mason

The first track on side one has huge bass and is very rich.

Check out the sweet vocals on the second song and the Tubey Magical richness of track three.

On side two note how big the piano sounds, and how much space surrounds it.

This album is very well recorded and you don’t need a pair of golden ears or a state-of-the-art system to hear it — assuming you have a great copy like this one.

If you don’t have a good copy of the album, no amount of money spent on stereo equipment is going to get this album to sound the way it should.

Graham Nash helps out on vocals on tracks one, two and five on the first side. Stevie Wonder plays a lovely harmonica solo on The Lonely One on side two, and George Harrison guests on guitar on If You’ve Got Love, the third track on side one.

Mason is perhaps one of the most creative forces, lyrically, musically and vocally, in pop today. He is at best with purely acoustic material such as the beautiful “Every Woman” and “Maybe,” but can also rock with the best as on “Silent Partner.” Singer, writer, arranger, producer — he does it all. – 1973

We know Schmitt‘s work well; he happens to have engineered many of our favorite albums, albums we know to have SUPERB SOUND: Aja, Hatari, Breezin’, Late for the Sky, Toto IV, Charade, etc. The guy’s won 13 Grammies, which ought to tell you something.