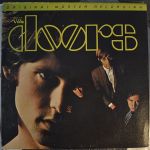 Reviews and Commentaries for The Doors’ Debut

More Records that Are Good for Testing Midrange Presence

The Doors first album is yet another obvious example of MoFi’s predilection for a sucked-out midrange.

Scooping out the middle of the midrange has the effect of creating an artificial sense of depth where none belongs. Play any original Bruce Botnick engineered album by Love or The Doors and you will notice immediately that the vocals are front and center.

When the DCC Doors first album was released on vinyl, we noted that the vocals were finally back where they belonged. After having lived with the MoFi for so many years, we’d almost forgotten.

And now of course we can’t tolerate the smear and opacity of the DCC. We like to think we’re simply setting higher standards these days.

The midrange suckout effect is easily reproducible in your very own listening room. Pull your speakers farther out into the room, and also farther apart, and you can get that MoFi sound on every record you play. I’ve been hearing it in the various audiophile systems I’ve been exposed to for years.

And note also that when you play your records too softly it results in an exaggerated, artificial sense of depth.

That’s one of the main reasons we play them loud; we want to hear which pressings have real presence and immediacy. They’re the ones that are most likely to win our shootouts. If you have any of our killer Hot stampers you surely know what I’m talking about.

Where Did the Musical Information Go?