More of the Music of Antonio Vivaldi

Reviews and Commentaries for The Four Seasons 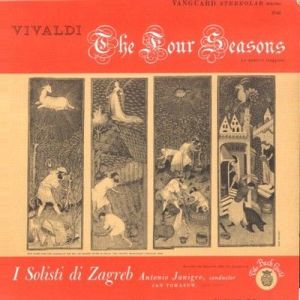 Folks, we have some good news for those of you who have been waiting for one of the best sounding, most beautifully performed Four Seasons ever recorded. THIS IS IT! White Hot on both sides, I can’t say the sound is better than the White Hot Shaded Dog pressing we heard in our recent shootout. It’s certainly different, and one could easily make the case for either. Of course one’s taste enters into the calculation, so choosing a clear winner is simply not possible with markedly superior pressings such as these.

Let’s just say that this small ensemble recording is as close to perfect as any we have ever heard. The harpsichord is especially good on the Vanguard recording, better than the RCA I would venture. Its placement in the soundfield is subtly natural, precisely the way one would expect to hear it in performance.

It should be noted that this is only the second time we have heard a good pressing of this Vanguard title. Normally the vinyl is abysmal — not just noisy, but grainy and lacking in top end. (You can listen for the sound of the vinyl itself on the lead-in grooves before the music starts.) This pressing is an absolute FLUKE. It gets all the sound of the tape onto the vinyl in a way that we have never heard before and would not have thought possible. But, as we never tire of saying, hearing is believing!

A+++, with all the things that make analog so involving and pleasurable: the warmth, the richness, the naturalness, and above all the realism. The players are right there.

On the technical side, the sense of space and the solidity of the image are qualities that we prize, qualities that allow us to forget we are in our listening rooms and not in the concert hall. The sound here has the power to transport you completely.

A+++, with the huge size and three-dimensional space of the live event captured intact, just like side one. You can’t record this music any better, as far as we know anyway.

Current bio for the group:

Founded in 1953 as an ensemble of the Zagreb Radio and Television under the artistic leadership of the renowned violoncellist and conductor Antonio Janigro, the ensemble I Solisti di Zagreb (= ISDZ, Zagreb Soloists) managed to achieve their goal trough hard work and absolute dedication – they became one of the prominent chamber orchestras in the world.

The Zagreb Soloists have performed without a conductor since 1968 (led by the concert-master Dragutin Hrdjok) and they found their longtime artistic director and concertmaster Tonko Ninić. In 1997 the same position was filled by Anđelko Krpan, in 2002 the artistic director of the ensemble was Karlo Slobodan Fio, while in the jubilee season, which celebrates the 50th anniversary of the ensemble, the role of concert-master is once again played by their longtime leader, maestro Tonko Ninić. From March 2006 concert-master and artistic leader is Borivoj Martinic-Jercic. Most ensemble members graduated from the Academy of Music in Zagreb and share virtuosic mastery of their instruments, remarkable discipline as well as incredible enthusiasm and love for ensemble playing.

The extensive repertoire of the Zagreb Soloists includes baroque, classical, romantic and contemporary works, while special attention is given to the opus of Croatian authors, both the past and the contemporary ones. They have recorded over seventy LP’s and CD’s for Vanguard, EMI, RCA, ASV, Eurodisc, Melodia, Hispa-vox, Pickwick and Croatia Records.

The Zagreb Soloists have received recognition and numerous prestigious awards including the following: the 1st prize in Mar de Plata (for the album The 18th Century Concertos), the Pablo Casals Medal, the Elisabeth Sprague Coolidge Medal (for the performance of contemporary music), the Vladimir Nazor, Milka Trnina, Orlando Awards (for the best performance of a Croatian work), the Ivan Lukačić Award given by the Varaždin Baroque Evenings, then the Villa Manin and UNESCO Awards, the City of Zagreb Award (twice), a Silver CD present by the record company Croatia Records, the Order of National Merits, the City of Zagreb Plaque, several Croatian music awards Porin, a silver plaque of the Jeunesses Musicales, and many others.

During the Croatian War of Independence the Zagreb Soloists gave about seventy benefit concerts (to raise funds for Dubrovnik, destroyed schools of music in Croatia, then for the destroyed building of the National Theatre in Osijek, Children’s Hospital in Zagreb, devastated Croatian churches and monuments). They also played series of concerts to celebrate the newly-independent Republic of Croatia.

They represent history on the concert stage. The dimension of their global achievement in chamber playing, that is in favor of spiritual quality of life, during their existence is so large that only their ensemble playing, which began in the meantime, returns us back to these days which once again acknowledge the above mentioned appeal of the acquired right to be considered an institution

Wikipedia on The Four Seasons