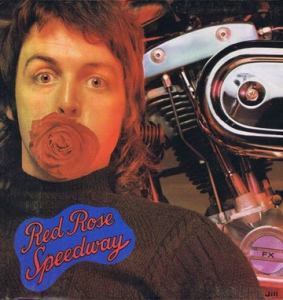 We have not had particularly good luck with the domestic pressings we’ve tried. The Brits are the only ones that, to our ears, seem to be made from the real tape.

Complete with the full-color 12-page booklet of photos and lyrics.

What We’re Listening For on Red Rose Speedway

This copy has the kind of sound we look for in a top-quality 70’s Pop Rock record: immediacy in the vocals (so many copies are veiled and distant); natural tonal balance (most copies are at least slightly brighter or darker than ideal; ones with the right balance are the exception, not the rule); good solid weight (so the bass sounds full and powerful); spaciousness (the best copies have wonderful studio ambience and space); and last but not least, transparency, the quality of being able to see into the studio, where there is plenty of musical information to be revealed in this sophisticated recording.

Many copies are veiled in the midrange, partly because they may have shortcomings up top, but also because they suffer from blurry, smeary mids and upper mids.

With a real Hot Stamper the sound is TOTALLY INVOLVING, and so is the music. You hear the breath in the voices, the pick on the strings of the guitars — these are the things that allow us to suspend our disbelief, to forget it’s a recording we’re listening to and not living, breathing musicians.

This is an area where Heavy Vinyl fails more often than not. Modern remastered records are just so damn opaque. That sound drives us to distraction when it doesn’t bore us to tears.

Red Rose Speedway winds up being a really strange record, one that veers toward the schmaltzy AOR MOR (especially on the hit single “My Love”), yet is thoroughly twisted in its own desire toward domestic art. As a result, this is every bit as insular as the lo-fi records of the early ’90s, but considerably more artful, since it was, after all, designed by one of the great pop composers of the century.

Yes, the greatest songs here are slight — “Big Barn Bed,” “One More Kiss,” and “When the Night” — but this is a deliberately slight record (slight in the way a snapshot album is important to a family yet glazes the eyes of any outside observer). Work your way into the inner circle, and McCartney’s little flourishes are intoxicating — not just the melodies, but the facile production and offhand invention.

If these are miniscule steps forward, consider this: if Brian Wilson can be praised for his half-assed ideas and execution, then why not McCartney, who has more character here than the Beach Boys did on their Brother records? Truthfully.