More Huey Lewis and The News 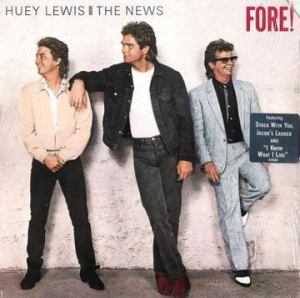 This vintage Chrysalis pressing has the kind of Tubey Magical Midrange that modern records can barely BEGIN to reproduce. Folks, that sound is gone and it sure isn’t showing signs of coming back. If you love hearing INTO a recording, actually being able to “see” the performers, and feeling as if you are sitting in the studio with the band, this is the record for you. It’s what vintage all analog recordings are known for — this sound.

What the Best Sides of Fore! Have to Offer Is Not Hard to Hear

What We’re Listening For on Fore!

By the fall of 1985, after three years on the road, it was time for the band to get a grip – and time to write and record another album. “While we were following Sports around the world, I don’t think we were aware of what was happening,” says Cipollina. “Sports came out and just did a slow, steady climb during ’84 and ’85. The whole time we were on the road, I don’t think we knew how famous we were getting. When we finally stopped touring, this huge wave of reality came crashing in behind us.”

“Everybody and his brother was waiting for this album,” Lewis says. “I’d get in a room with a pencil and paper or a guitar, and it was ‘Well, I’ve got to write a song now. How about if I write one about this? Well, jeez, I already wrote about that. That was “The Heart of Rock and Roll.” Let’s see, how about this? Well I’ve already done that.’ And so on. You can’t really conjure these things up.”

Though they were now seasoned performers, Huey and the band were not adept at writing hits on demand. With his band – Cipollina, Hopper, guitarist-saxophonist Johnny Colla, guitarist Chris Hayes and drummer Bill Gibson – Lewis sweated out some new material. “We wrote about six songs that way,” says Lewis. “We’d write them and go record them, and they’d come out terrible. And I’d sit back and go, ‘The trouble with this is it’s a lousy song.”‘

After an agonizing six months of “work, work, work,” the breakthrough finally came. Hayes, 28, received a phone call from the band’s manager, Bob Brown, who was getting jittery. “I think we’re gonna need some more songs, man,” Brown said. “We need a tune.” Hayes’s reaction, he recalls, was “God, Bob, I don’t know. I’ve got a lot of things going. My wife’s pregnant right now. But let me see what I can do.” Hayes went out, bought himself a six-pack and went into the studio. “Three hours later,” he says, “I had ‘Stuck with You.’”

With that song, the members of the magic circle regained their charmed existence. “Chris gave me the tape, and the melody and words came straight out,” Lewis recalls. “And I thought, ‘That’s the way to do it. Don’t try to write so hard. Receive. . . . Let the ideas come.’ When you’re working so hard, there’s no room for ideas to flow into you. It sounds a little cosmic, but I really think that’s it. I wrote [the lyrics to “Stuck with You”] in fifteen minutes, driving out to rehearsal and back in one fell swoop.”

That song, which took Hayes and Lewis three hours and change to write, zoomed to the Number One spot on Billboard‘s Top 100; four weeks after that, Fore! was the Number One album. It heralded the return of Huey Lewis and the News. They would not be victims of what Cipollina calls “that huge record that kills you.”

This is by far one of the absolute best releases by Huey Lewis & the News. Powerful, hard-hitting, and quite emotional. . . for those of you who like hard-hitting, powerful rock music from the ’80s era — but without all the nonsense and profanity — then I definitely would suggest that this album is for you. Don’t get me wrong, for there are other bands out there who are just as popular as Huey Lewis & the News, if not even more popular, such as Journey and Rush — whom I also love to this day, but Huey Lewis’s band is one of the groups I began listening to early on in my teenage years. Besides, they are still pretty much “The Heart of Rock & Roll”.