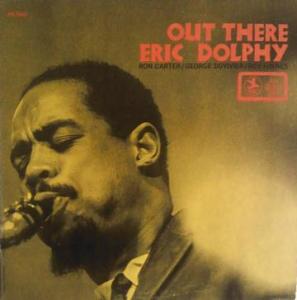 This vintage Prestige pressing has the kind of Tubey Magical Midrange that modern records can barely BEGIN to reproduce. Folks, that sound is gone and it sure isn’t showing signs of coming back. If you love hearing INTO a recording, actually being able to “see” the performers, and feeling as if you are sitting in the studio with the band, this is the record for you. It’s what vintage all analog recordings are known for —this sound.

What We’re Listening For on Out There

Out There
Serene
The Baron

The follow-up album to Outward Bound, Eric Dolphy’s second effort for the Prestige/New Jazz label (and later remastered by Rudy Van Gelder) was equally praised and vilified for many reasons. At a time when the “anti-jazz” tag was being tossed around, Dolphy’s nonlinear, harshly harmonic music gave some critics grist for the grinding mill. A second or third listen to Dolphy’s music reveals an unrepentant shadowy side, but also depth and purpose that were unprecedented and remain singularly unique.

Dolphy’s ideas must be fully embraced, taken to heart, and accepted before listening. The music reveals the depth of his thought processes while also expressing his bare-bones sensitive and kind nature.

A somber and unusual album by the standards of any style of music, Out There explores Dolphy’s vision in approaching the concept of tonality in a way few others — before, concurrent, or after — have ever envisioned.