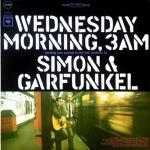 We played a big stack of copies a while back and ran into all kinds of problems.

Some were dull, some were spitty, many were smeared, and far too many were gritty.

The later pressings didn’t solve any of these problems. In fact, none of the Red Label copies we’ve ever played sounded good enough on either side to merit a Hot Stamper grade. If you want good sound for this album, 360 stereo pressings seem to be the only way to go. The mono pressings we played were painfully bad.

Stick with stereo on this album. The Mono pressings — at least the ones we’ve played — aren’t worth anybody’s time (scratch that: any audiophile’s time).

He Was My Brother
Peggy-O
Go Tell It on the Mountain
The Sun Is Burning
The Times They Are A-Changin’
Wednesday Morning, 3 A.M.

Their first record together since their days as the teen duo of Tom & Jerry, the album was cut in March 1964 and, in keeping with their own sincere interests at the time, it was a folk-revival album. Paul Simon was just spreading his wings as a serious songwriter and shares space with other composers as well as a pair of traditional songs, including a beautifully harmonized rendition of Peggy-O.

Which simply means that the 360 label domestic stereo pressings win our shootouts, in this case without exception.