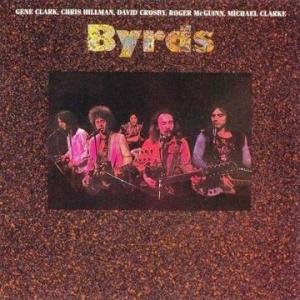 Even though this is not one of The Byrds’ stronger albums, it does have some very nice material. For Free on side one may very well be the high point of the album for me. They also do a nice version of Neil Young’s Cowgirl In The Sand.

What We’re Listening For on The Byrds

In 1972, Roger McGuinn’s final version of the Byrds unceremoniously broke up, but the following year the group briefly reunited — surprisingly enough, with the classic original lineup of McGuinn, Gene Clark, Michael Clarke, David Crosby, and Chris Hillman. However, if most of the participants meant for this to be anything more than a one-shot get-together, you couldn’t tell from listening to the resulting album; Byrds never sounds much like a Byrds album, absent McGuinn’s chiming 12-string guitar and the group’s striking harmonies (the Byrds’ twin aural calling cards). Much of the original material, especially David Crosby’s, sounds like cast-offs from their other projects. And what sort of a Byrds album features two Neil Young covers and not a single Bob Dylan tune? In all fairness, Byrds has its moments: Gene Clark’s “Full Circle” and “Changing Heart” are great songs from the group’s least-appreciated member, and McGuinn’s “Born to Rock ‘n’ Roll” is a top-notch rock anthem. But for the most part, Byrds sounds like a competent but unexciting country-rock band going through their paces, rather than the work of one of the best and most innovative American bands of the 1960s.