More Titles that Sound Best to Us in Mono 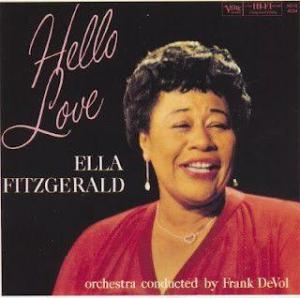 This vintage Verve pressing has the kind of Tubey Magical Midrange that modern records rarely begin to reproduce. Folks, that sound is gone and it sure isn’t showing any sign of coming back.

Hot Stamper sound is rarely about the details of a given recording. In the case of this album, more than anything else a Hot Stamper must succeed at recreating a solid, palpable, real Ella Fitzgerald singing live in your listening room. The better copies have an uncanny way of doing just that.

What the best sides of Hello Love have to offer is not hard to hear:

What We’re Listening For on Hello Love

A fine gem among the diamonds of Ella Fitzgerald’s late-’50s period with Verve… Wrapped in the strings of Frank DeVol’s orchestra, Fitzgerald is a bewitching presence singing these dreamy standards: “Tenderly,” “You Go to My Head,” “Willow Weep for Me,” and “Stairway to the Stars.” DeVol’s charts are dynamic as well, allowing space for expressive players such as trumpeters Harry “Sweets” Edison and Pete Candoli or tenor Ben Webster. A few of the titles are solo versions of songs she had recently sung on her Louis Armstrong duets.