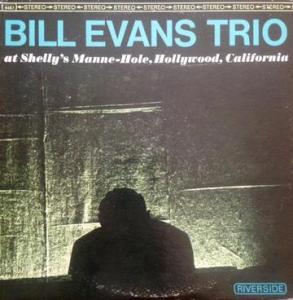 This vintage Riverside Stereo pressing has the kind of Tubey Magical Midrange that modern records can barely BEGIN to reproduce. Folks, that sound is gone and it sure isn’t showing signs of coming back. If you love hearing INTO a recording, actually being able to “see” the performers, and feeling as if you are sitting in the studio with the band, this is the record for you. It’s what vintage all analog recordings are known for —this sound.

Although the Scott LaFaro-Paul Motian lineup of the Bill Evans Trio is generally considered to be the strongest, Chuck Israels and Larry Bunker make a strong case of their own on At Shelly’s Manne-Hole, a 1964 release that finds the entire band in classic form. This particular trio may lack some of the sheer combustive force of the better-known lineup, but it is, if possible, even more sensitive, melancholic, and nostalgic than the previous band. The leadoff track, “Isn’t It Romantic,” is one of Evans’ finest moments, with the gently swinging theme leading into a strong, if restrained, solo from Israels.

Over Bunker’s sensitive brush work, Evans comments briefly and beautifully on the theme before returning to the head. The band’s readings of such classics as “‘Round Midnight,” “Stella By Starlight,” and “All the Things You Are” are wonderful, but it is the lesser-known tracks, such as “Swedish Pastry” and the aforementioned “Isn’t It Romantic,” that makes this recording so valuable. Jazz is rarely as sensitive or as melodic as this. Another classic from Bill Evans and company.