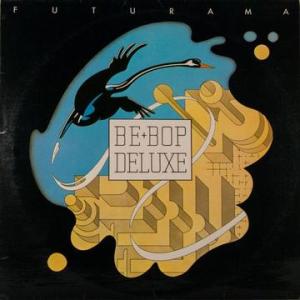 This vintage EMI Harvest pressing has the kind of Tubey Magical Midrange that modern records rarely even BEGIN to reproduce. Folks, that sound is gone and it sure isn’t showing signs of coming back. If you love hearing INTO a recording, actually being able to “see” the performers, and feeling as if you are sitting in the studio with the band, this is the record for you. It’s what vintage all analog recordings are known for — this sound.

What the best sides of Futurama have to offer is not hard to hear:

What We’re Listening For on Futurama

Music In Dreamland
Jean Cocteau
Between The Worlds
Swan Song

Every month—or is it week?—seems to bring a new rock band from Britain, eager to catch a few leftover crumbs from the Anglophilia of the 1960’s. Most fail completely: others latch onto an FM cult success; a very few, unpredictably, make it big—Elton John (if he can be counted British act anymore), Led Zeppelin, Bad Company.

The latest claimant, currently trundling about the country as the opening act on various bills, is caled Be-Bop Deluxe. The band’s first New York date keeps getting postponed; current reports have it sometime in the third week of April. It’s worth waiting for; if this quartet’s live performances match its records, it could be something very special indeed.

The band is built around Bill Nelson, who comes from Yorkshire, is 27 years old and writes the songs, sings them, plays all the guitar parts and adds periodic harmonica and percussion…

For this listener, however, Mr. Nelson’s music and his guitar playing lift Be-Bop Deluxe out of the ordinary. The music sounds something like the febrile eclecticism of Roxy Music and Queen and Mr. Nelson admits the kinship.

Sometimes the sheer plethora of intertwined ideas and styles seems just too much—“Everything I’ve ever heard is kind of mixed up in there,” Mr. Nelson says happily. But where other bands lose their musical impetus in fussy artsiness, Be-Bop Deluxe is redeemed by the brilliance of its playing, and particularly Mr. Nelson’s guitar playing. His records put Mr. Nelson right up there with the other great masters of the electric guitar. One looks forward to hearing the band in person with a far greater than usual expectation.