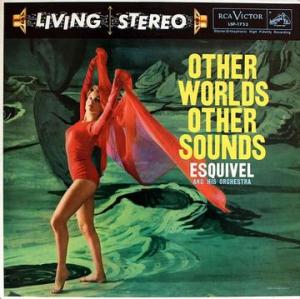 This vintage Living Stereo pressing has the kind of Tubey Magical Midrange that modern records can barely BEGIN to reproduce. Folks, that sound is gone and it sure isn’t showing signs of coming back. If you love hearing INTO a recording, actually being able to “see” the performers, and feeling as if you are sitting in the studio with the band, this is the record for you. It’s what vintage all analog recordings are known for —this sound.

What the Best Sides of Other Worlds, Other Sounds Have to Offer Is Not Hard to Hear

What We’re Listening For on Other Worlds, Other Sounds

Other Worlds Other Sounds may be the best known Esquivel album because of its sensational jacket art portraying a red-caped woman prancing across a green planetary landscape. Its real significance is as the moment where Esquivel takes control of his production and develops his signature sound. The chorus (the Randy Van Horne Singers) begins the “zu zu zu” nonsense beloved by Esquivel fans, and the playfulness with stereophonic separation begins here…. This is the promise of the future.

Esquivel is considered the king of a style of late 1950s-early 1960s quirky instrumental pop known today as Lounge music. Esquivel’s musical style was highly idiosyncratic, and although elements sound like his contemporaries, many stylistic traits distinguished his music and made it instantly recognizable, including exotic percussion, wordless vocals, virtuoso piano runs, and exaggerated dynamic shifts. He used many jazz-like elements; however, other than his piano solos, there is no improvisation, and the works are tightly, meticulously arranged by Esquivel himself, who considered himself a perfectionist as a composer, performer, and recording artist.

His orchestration tended toward the very lush, employing novel instrumental combinations, such as Chinese bells, mariachi bands, whistling, and numerous percussion instrument, which he blended with an orchestra, a mixed chorus, and his own heavily-ornamented piano style. The chorus was often called upon to sing only nonsense syllables, most famously “zu-zu” and “pow!” A survey of Esquivel’s recordings reveals a fondness for glissandi, sometimes on a half-valved trumpet, sometimes on a kettle drum, but most frequently on pitched percussion instruments and slide guitars.

Esquivel’s use of stereo recording was legendary, occasionally featuring two bands recording simultaneously in separate studios, such as on his album Latin-Esque (1962). The song “Mucha Muchacha” makes particularly mind-bending use of the separation, with the chorus and brass rapidly alternating stereo sides.