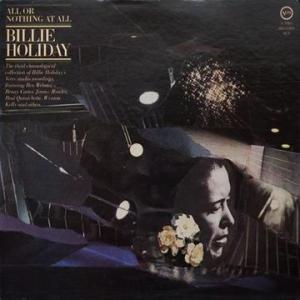 In addition to being tonally correct and natural, the pressings we offer must also be highly resolving. With the right room and the right equipment, properly setup and adjusted of course, you will hear everything that these vintage recordings have to offer, including the three-dimensional space of the studios in which the various sessions were recorded, under the auspices of Norman Granz.

The original Trumpet Player Verve mono we had on hand to play suffered from an EQ problem we frequently run into during our shootouts for vintage vocal albums. Actually, to be clear, there were two main problems in the case of All or Nothing At All: a boosted midrange and occasional quite serious sibilance issues.

Ella Fitzgerald’s albums can suffer from these same two problems. It’s a trick to find the copies that are tonally correct in the midrange and do not have the kind of cutter head distortions that result in excessive sibilance.

What We’re Listening For on All Or Nothing At All

The mono remastering — on the right pressings, obviously — can be superb. We found out to our chagrin that this particular double album had been cut by a number of different mastering houses, with wildly varying results. In a way we were lucky; had we heard the bad ones early on we would never have been motivated to buy more of them and get the shootout going.