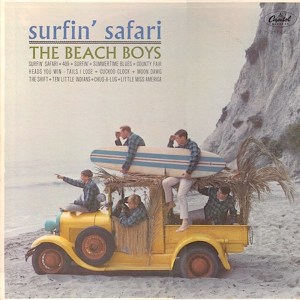 We have to admit we were wrong about the early Beach Boys pressings sounding like the bad Capitol Beatles LPs we know all too well. As we discovered in our recent shootout, some of them can sound great.

There are also amazing sounding reissues, and this is one of those.

The sound is big, open, rich and full, with the band front and center. (It’s a mono pressing of a mono recording so the band had better be in the center or something is definitely amiss.) The highs are extended and sweet. The bass is tight and full-bodied. Very few early Beach Boys records offer the kind of sound you will hear on this pressing, and on both sides no less.

This vintage Capitol LP also has the MIDRANGE MAGIC that’s no doubt missing from whatever 180g reissue has been made from the 58 year old tapes. As good as that pressing may be, we guarantee that this one is dramatically more REAL SOUNDING. It gives you the sense that The Beach Boys are right in the room with you.

Capitol pressings are all over the map. When you find a good one, you can be pretty sure it’s the exception, not the rule. That’s been true to our experience during the thirty plus years we’ve been in the audiophile record business anyway.

What the best sides of The Beach Boys’ Debut have to offer is not hard to hear:

No doubt there’s more but we hope that should do for now. Playing the record is the only way to hear all of the qualities we discuss above, and playing the best pressings against a pile of other copies under rigorously controlled conditio

What We’re Listening For on Surfin’ Safari

The Beach Boys’ debut album, recorded in an era in which little was expected of rock groups in the way of strong LP-length statements… The title track, their first true smash, is great, as is its flip side (“409”), which was not only a hit in its own right, but was the first vocal hot rod classic. “Surfin’,” their debut single (and small national hit), is also good, and one of the few Beach Boys tracks that could be said to have a garage-like quality… It does, however, afford a glimpse of the group as they sounded when they were a true band in the studio, before most of their parts were played by session musicians. Two of the better cuts, “The Shift” and the instrumental “Moon Dawg,” have a grittier-than-usual surf rock base that would flower on 1963 hits like “Surfin’ U.S.A.”