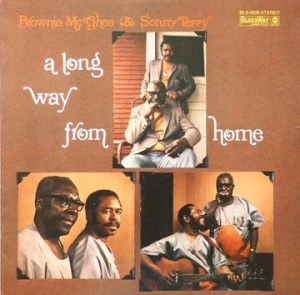 This original Bluesway pressing has the kind of Tubey Magical Midrange that modern records can barely BEGIN to reproduce. Folks, that sound is gone and it sure isn’t showing signs of coming back. If you love hearing INTO a recording, actually being able to “see” the performers, and feeling as if you are sitting in the studio with the band, this is the record for you. It’s what vintage all analog recordings are known for — this sound.

What We’re Listening For on A Long Way From Home

Life Is A Gamble
Don’t Mistreat Me
Packin’ Up, Gettin’ Ready
Wailin’ And Whoopin’
B.M. Special

Music from Brownie and Sonny’s latter period, circa March and September of 1969. This combines two albums (A Long Way from Home and I Couldn’t Believe My Eyes, both cut in two days) recorded for ABC-BluesWay, with the inclusion of a stray unreleased track, “Beggin’ You,” from the second session in September. The personnel stays basically the same for both sessions with excellent rhythm section support from drummer Panama Francis and bassist Jimmy Bond, while the September session also includes Earl Hooker on guitar. Solid, relaxed, rockin’ grooves are the hallmarks here with both artists in fine form.