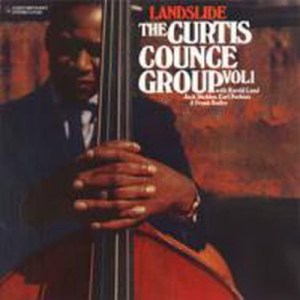 Both sides are over twenty minutes, giving you a lot of well-played West Coast Jazz for your money.

This vintage Contemporary Stereo pressing has the kind of Tubey Magical Midrange that modern records rarely even BEGIN to reproduce. Folks, that sound is gone and it sure isn’t showing signs of coming back. If you love hearing INTO a recording, actually being able to “see” the performers, and feeling as if you are sitting in the studio with this superb quintet, this is the record for you. It’s what vintage all analog recordings are known for — this sound.

What the best sides of Volume 1 – Landslide have to offer is not hard to hear:

What We’re Listening For on Landslide

Mia
Sarah
A Fifth For Frank

During 1956-1957, bassist Curtis Counce led an excellent Los Angeles-based hard bop quintet comprised of trumpeter Jack Sheldon, tenor saxophonist Harold Land, pianist Carl Perkins, bassist Curtis Counce, and drummer Frank Butler. They recorded four albums’ worth of material for Contemporary…. For their debut album, the group performs selections by Land (“Landslide”), Perkins, Sheldon, and two by Gerald Wiggins (including “Sonar”), plus the lone standard “Time After Time.” All of Counce’s recordings (which include a slightly later album for Dootone) are well-worth getting by collectors interested in 1950s straight-ahead jazz.

“Curtis Counce was an in-demand session bassist and one of the first African Americans to get heavily involved in the West Coast jazz movement in the 1940s. He studied violin and tuba in addition to bass before leaving his native city for employment with the Nat Towles Band in Omaha at the age of 16. He moved to L.A. in 1945, taking a job with Johnny Otis at the Club Alabam and made his recording debut with Lester Young the following year. He recorded prolifically as a sideman (Shelly Manne, Lyle Murphy, Teddy Charles, Clifford Brown) before starting his famous quintet in 1956. His premature death (1963) from a heart attack was a tragic loss to jazz.” — AMG