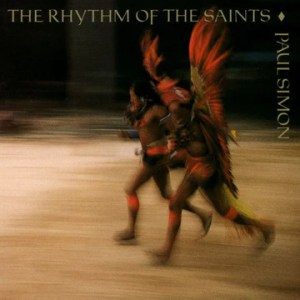 *NOTES: On side one, a tiny mark makes 4 light ticks during the outro of Track 1, The Obvious Child.

This vintage Warner Bros. pressing has the kind of Tubey Magical Midrange that modern records rarely even BEGIN to reproduce. Folks, that sound is gone and it sure isn’t showing signs of coming back. If you love hearing INTO a recording, actually being able to “see” the performers, and feeling as if you are sitting in the studio with the band, this is the record for you. It’s what vintage all analog recordings are known for — this sound.

What the best sides of The Rhythm of the Saints have to offer is not hard to hear:

What We’re Listening For on The Rhythm of the Saints

She Moves On
Born At The Right Time
The Cool, Cool River
Spirit Voices
The Rhythm Of The Saints

Though he recorded the album’s prominent percussion tracks in Brazil, Paul Simon fashioned The Rhythm of the Saints as a deliberate follow-up to the artistic breakthrough and commercial comeback that was the South Africa-tinged Graceland. Several of the musicians who had appeared previously were back, along with some of the New York session players who had worked with Simon in the 1970s, and the overall sound was familiar to fans of Graceland.

Further, Simon’s nonlinear lyrical approach was carried over: he continued to ruminate about love, aging, and the onslaught of modern life in disconnected phrases and images that created impressions rather than telling straightforward stories.