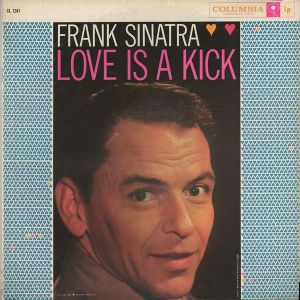 This vintage Columbia Six-Eye Stereo pressing has the kind of Tubey Magical Midrange that modern records rarely begin to reproduce. Folks, that sound is gone and it sure isn’t showing any sign of coming back.

What the best sides of Love Is A Kick have to offer is not hard to hear:

What We’re Listening For on Love Is A Kick

The music on this Frank Sinatra LP comes from recordings made for the Columbia label beginning in 1944 and running through 1952. Five of the cuts are from two sessions in April of 1950 with an orchestra led by George Siravo…

…The other cuts are led and arranged by the likes of Hugo Winterhalter, Mitch Miller, and Axel Stordahl. Virtually all the material is upbeat, displaying Sinatra’s considerable proclivities for swing. There are also examples of Sinatra’s fondness for fooling around with the lyrics, such as with “Bim Bam Baby.” The program includes tunes that he was to record again during his career, “Five Minutes More” among them.

Throughout his long career, Sinatra was able to attract the best in studio musicians and these cuts are no exceptions. In addition to the James orchestra, Billy Butterfield, Herman Shertzer, Jerry Jerome, and others of equally high caliber are part of these recordings. Sinatra also demanded and got arrangements which were way above the level of stock charts.