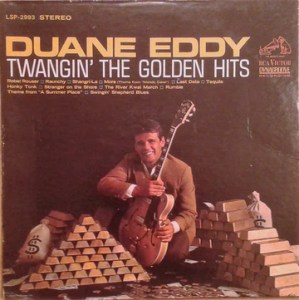 What We’re Listening For on Twangin’ The Golden Hits

Every song is enjoyable. Most of the album is fun and peppy, with a few slower tunes thrown in, like “Last Date” and “Theme from a Summer Place”. WARNING! I think most would be disappointed by the fact that (I think) the bigger Duane hits on this album (“Rebel Rouser” obviously) are remakes of his originals. Oh well. I didn’t grow up in that era, and I like these versions fine.

Best song: “Honky Tonk”. This shuffle rocks on for 6 minutes (unusual for pop/rock in the early/mid ’60’s) and is perfect from beginning to its explosive ending. Again, admittedly, I don’t know the original by Bill Doggett. While it is undoubtedly a classic, I simply love Duane’s version.

Other highlights include “Raunchy”, “Rumble”, and the light “Swingin’ Shepherd’s Blues”. Oh, you’ve got to love the gold bars on the cover. The wood grain shows a little too clearly through the gold paint…funny.