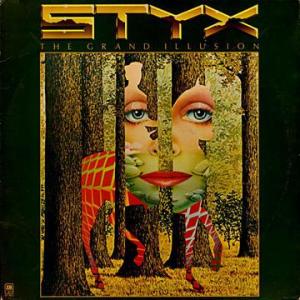 The richness, sweetness, and freedom from artificiality of this pressing are obvious where you often hear it on a Big Production like The Grand Illusion: in the loudest, densest, most climactic choruses.

On Breakfast in America, the sax toward the end of The Logical Song is bigger and louder than anything on the record, louder even than Roger Hodgson’s near-hysterical multi-tracked screaming “Who I am” about three quarters of the way through the track. Those, however, are clearly exceptions to the rule. Most of the time it’s the final chorus of a pop song that gets bigger and louder than what has come before.

We live for that sound here at Better Records. It’s precisely what the best vintage analog pressings do so brilliantly. In fact, they do it so much better than any other medium that there is really no comparison, and certainly no substitute. If you’re on this site you probably already know that.

What We’re Listening For on The Grand Illusion

Other than being their first platinum-selling album, The Grand Illusion led Styx steadfastly into the domain of AOR rock. Built on the strengths of “Come Sail Away”‘s ballad-to-rock metamorphosis, which gained them their second Top Ten hit, and on the high harmonies of newcomer Tommy Shaw throughout “Fooling Yourself,” The Grand Illusion introduced Styx to the gates of commercial stardom.

The pulverized growl of “Miss America” reveals the group’s guitar-savvy approach to six-string rock, while De Young pretentiously struts his singing prowess throughout the title track. Shaw’s induction into the band has clearly settled, and his guitar work, along with James Young’s, is full and extremely sharp where it matters most. Even the songwriting is more effluent than Crystal Ball, which was released one year earlier, shedding their mystical song motifs for a more audience-pleasing lyric and chord counterpoise.

Reaching number six on the album charts, The Grand Illusion was the first to display the gelled accomplishments of both Tommy Shaw and Dennis De Young as a tandem.