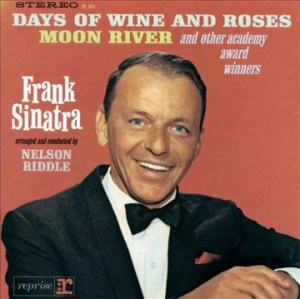 For our first Hot Stamper listing in 2014 we had written:

One of the best sounding Reprise-era Sinatra recordings we know of.

Having just listened to a slough of top Sinatra titles, I feel it’s my duty to inform the record buying public — at least that small fraction of the public that comes to this site — that the above statement is somewhat inaccurate. It should have read:

One of the best sounding Sinatra recordings we know of from any era.

And the reason for the change is simple enough: I simply cannot recall ever hearing a better sounding Frank Sinatra record in my life.

He Invented the Concept

It’s not a compilation, it’s a theme album, a favorite approach of Sinatra’s — he’s often credited with inventing the form — containing the best Oscar-winning standards from the last 40 years. Ad what great songs they are: Days of Wine and Roses, Moon River, Three Coins in the Fountain, Swinging on a Star, It Might As Well Be Spring, Love Is a Many-Splendored Thing, and many more. Really, there’s not a dog in the bunch.

And never discount Nelson Riddle’s arrangements – as is par for the course they’re brilliant. Somehow Riddle managed to arrange five (5!) albums for Sinatra in 1964 alone. How he kept to the high standards that Sinatra set for him (and that he no doubt set for himself) is beyond me.

Big and clear, with rich, Tubey Magical breathy vocals. More space, less distortion, more relaxed, tonally correct from top to bottom — this is the sound you want for Sinatra.

Listen to how full-bodied and rich the brass sounds on side two — when has a Sinatra record ever had brass like that?! Ellington, yes, but Sinatra? It sets a standard that will be very hard for any other album, or any other pressing of this very album, to meet.

The mono pressings of this album — like so many of Sinatra’s stereo recordings released in mono — were a joke compared to these wonderful stereo records.

Featuring a selection of Oscar-winning standards, ranging from 1934’s “The Continental” to 1962’s “Days of Wine and Roses,” Academy Award Winners is a professional and stylish album…

Sinatra is charming and lively, even if he doesn’t demonstrate the full range of his technique on each track, while Riddle’s charts are light and entertaining.

… some of the moments are first-rate — “The Way You Look Tonight” is one of Sinatra’s classic performances, and “Three Coins in the Fountain” and “All the Way” are nearly as good…