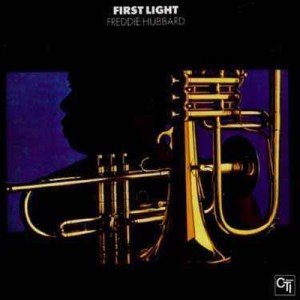 This is more of a mainstream jazz record than Red Clay or Straight Life. Hubbard was a master of funky jazz, and this pressing was one of the few in our shootout with the kind of high quality mastering that can do justice to his uniquely energetic, lightning fast jazz style.

This vintage CTI pressing has the kind of Tubey Magical Midrange that modern records rarely even BEGIN to reproduce. Folks, that sound is gone and it sure isn’t showing signs of coming back. If you love hearing INTO a recording, actually being able to “see” the performers, and feeling as if you are sitting in the studio with the band, this is the record for you. It’s what vintage all analog recordings are known for — this sound.

What the best sides of First Light have to offer is not hard to hear:

What We’re Listening For on First Light

We’ve been really digging these Creed Taylor productions for years now. On the better albums such as this one, the players tend to sound carefree and loose — you can tell they’re enjoying the hell out of these songs. Don’t get me wrong — we still love the Blue Note and Contemporary label stuff for our more “hard core” jazz needs, but it’s a kick to hear top jazz musicians laying down these grooves and not taking themselves so seriously… especially when it sounds as good as this copy does.

Never one to take lyricism for granted, trumpeter and composer Freddie Hubbard entered Creed Taylor’s studio for the third time in 1971 with the express purpose of making a record radically different from anything he’d cut before; he was looking for it to use electricity and to be out of the soul-jazz mold, but was also more ambitious and wanted to push that envelope and himself.

Taylor and Hubbard assembled a band that included Herbie Hancock on Rhodes, guitarists Eric Gale and George Benson, bassist Ron Carter, Jack DeJohnette on drums, Airto Moreira on percussion, and Richard Wyands on acoustic piano to back him. The band was also supported by the truly ethereal and adventurous string arrangements of Don Sebesky (a first for Hubbard). The result is a masterpiece of textured sound, gorgeously far-flung charts, sweet, tight grooves, a subtle mystic feel, and some of Hubbard’s most exciting playing ever.

The title track and Hubbard’s ingenious read of Paul and Linda McCartney’s “Uncle Albert/ Admiral Halsey,” as well as Leonard Bernstein’s “Lonely Town,” are so in the pocket that they bleed soul. Benson’s uncharacteristically edgy guitar playing juxtaposed against Hubbard’s warm tone, and Hancock’s beautifully modal Rhodes lines that are drenched with big, open, minor chord voicings, are simply made more illustrious and graceful by Sebesky’s strings.

While Red Clay and Straight Life are both fine albums, First Light is the one that connects on all levels — and it did with the jazz-buying public as well. A masterpiece.