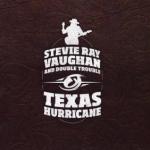 A good customer bought some SRV Hot Stampers from me a while back. He then told me he was going to spend $400 on the AP SRV Box Set

For kicks on this issue of heavy vinyl vs. hot stampers, I’m tempted to order the ‘Texas Hurricane’ box set — 45rpm, 200g etc. — and shoot it out against the SRV records I’ve got from you.

Would you be interested to know how that goes?

Just an idea… I’m delighted with what I have from you, but so curious to learn more by comparing etc. Could be fuel for a cool blog post in due course…

Oh, I think you are in for quite a shock, and of course we would take our copies back, but I would give you very good odds that that will never happen as long as you have two working ears.

A few weeks go by.

So the results are in … after listening to Texas Hurricane (at 45rpm) and comparing to the White Hot Stamper versions of the same albums I can say… as a musical experience it’s incomprehensible. It just doesn’t rock, doesn’t uplift, and it’s veiled, so you lose the whole meaning of this music, the energy, soul, life.

I wasted $400 to find this out. Any chance you have another customer who’d like to relieve me of it to do their own shootout?

Good to know you will never doubt me again! Always think back to the sour taste in your mouth and the painful throbbing in your brain from playing this heavy vinyl garbage and perhaps you will never be tempted again. If you feel the urge to cross over to the dark side, please email me and I will do my best to talk you out of it. That way lies madness (and audio frustration).

Is this a bad sounding record?

I don’t know, never played it.

Does Analogue Productions have a pretty good track record to rely on in these matters?

Or are they, as I have been saying since 1995, one of the worst labels of all time?

In another commentary I wrote:

If your system is so ridiculously bad that an Analogue Productions Heavy Vinyl LP doesn’t call attention to its manifold shortcomings, doesn’t actually make your head hurt and your blood boil at the very idea that someone would charge money for such a bad sounding record, you might want to think about scrapping your precious audiophile equipment and starting over.

And do you think Michael Fremer is a reliable guide to the better sounding vinyl pressings currently available? Here is his take:

“His overdriven Stratocaster sound is one that guitar aficionados never tire of hearing live or on record, especially when it’s well recorded. … Yet again, Chad Kassem sets high the box set reissue bar delivering a “must have” package for SRV fans, every bit the equal of the one Doors fans have come to cherish. …every one of these records betters the originals and by a considerable margin. It is not even close…You’ve never heard these albums sound like this. That is a 100 % guaranty. …this is an impeccably produced box set physically and especially sonically. It’s the best these albums have ever and probably will ever sound.” — Music = 9/11; Sound = 10/11 — Michael Fremer, AnalogPlanet.com.

Winner of a Gruvy Award, chosen by AnalogPlanet’s editor, Michael Fremer, for vinyl records that are musically and sonically outstanding and are also well mastered and pressed.

Maybe David McGee, a reviewer for The Absolute Sound, knows a thing or two about good sound. He gave the set 5 out of 5 for Sound and Music:

How about Robert Baird, a reviewer for Stereophile. Not to be outdone, he also gave the set 5 out of 5 for Sound and Music:

“These recordings have never sounded this good, and likely will never sound better. Layers seem to have been stripped away, and the music seems to have been set free. Vaughan’s guitar has new bite and edge…sonically, all questions have now been answered: Texas Hurricane is the Stevie Ray set to own and enjoy.” — Performance = 5 Stars, Sonics = 5 Stars. Robert Baird, Stereophile, July 2014.

It will only cost you $400 to find out whether these two reviewers know what they are talking about. If it’s a case (two cases, really) of Reviewer Malpractice, I have some bad news for you as you will see below.

What do you do with the Box Set if you find out these reviewers are full of horse pucky and it sounds as awful as our friend CF say it does? Can you send it back to Acoustic Sounds?

“Within 30 days of purchase, we will accept returns of any physically or audibly defective or damaged item. We do not guarantee that you will like the music or recording quality of a LP or CD, and personal taste does not qualify as a reason for return.”

There is a reason they have that policy. They sell bad sounding records.

We have the opposite policy. You can return any record for any reason within 30 days and get 100% of your money back.

We can do that because we sell good sounding records.

Great stuff, love it. Someone’s gotta keep this industry as a whole accountable. It’s like we’re in the dark ages with just a few devoted monks scouring the libraries and preserving the truth of what once was. Hopefully due to your lifetime’s commitment to this we’ll one day see a renaissance of quality, but it’s looking pretty bleak currently.

We leave you with this comment from Michael Fremer, a man who apparently cannot get enough of this crap.

With all of the reissues coming from questionable sources or proudly proclaiming their ‘digital-ness’ ala The Beatles Box, we’re fortunate to have labels like Analogue Productions, Mobile Fidelity, ORG, IMPEX, Rhino and the others cutting lacquers from analog tapes. Acoustic Sounds’ Chad Kassem sent this image of the master tape box from Couldn’t Stand the Weather one of the many Stevie Ray Vaughan albums his reissue label is currently readying for release, pressed at his Quality Record Pressings pressing plant in Salina, Kansas. That’s a form of vertical integration we like! I have heard some truly miserable vinyl reissues from labels like Vinyl Lovers and ZYX some of which didn’t even sound like the same music when compared to original pressings. I’ve also heard test pressings of these SRV albums and they will rock your world! So, we are lucky to have these companies that are doing things correctly lavishing vinyl goodies on us all year long. Sometimes we wish they’d stop long enough for us to catch up, but then we come to our senses and say “more please!” even when the shelves are stuffed. 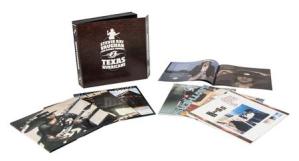