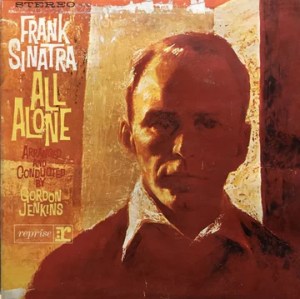 The music is not so much about the details in the recording, but rather in trying to recreate a solid, palpable, real Frank Sinatra singing live in your listening room. The best copies have an uncanny way of doing just that.

All Alone is a collection of Torch Songs, which Allmusic defines this way:

Torch Songs are particularly sultry ballads, so named for their slow-burning quality, and usually coming from the American pop-standard canon. In order to make them more sensuous than straight-ahead pop readings, most torch songs are performed with at least a little bit of jazz sensibility and swing. But although torch singers may use the songs as vehicles to show off their vocal range, jazz improvisation is rarely emphasized, instead spotlighting the smooth, seductive tones of the singer’s voice.

Torch songs can either celebrate romance or lament heartbreak, but they always create a mood related to affairs of the heart. Very few artists work exclusively in this style, but many pop-oriented jazz singers — especially female ones — devote some space in their repertoire to torch songs.

The biggest issue with Reprise-era Sinatra is always grit and grain, and we’re happy to report that this superb pressing has very little of either.

Also it’s often the case that the strings may seem a bit shrill or smeary (or both; smear itself can actually make the strings sound shrill). The more harmonically correct and rosiny the string tone, the better the sound, obviously.

We tried to get this shootout off the ground in 2012 and just did not have a big enough pile of copies to work with in order to find a truly Award Winning pressing. Since that time we’ve done the shootout twice, with bigger piles of copies, and nothing but good luck as regards Award Winners.  The best pressings are superb in all respects.

Many substantial improvements to our cleaning regimen and playback quality allow records such as this one to sound dramatically better than they did even a few years ago. It’s the reward for all the hard work that we audiophiles go through. If you are not making regular improvements to your stereo and cleaning system, now is the time to start.

What We’re Listening For on All Alone

We want to give a special shoutout here to conductor/arranger Gordon Jenkins, who also handled the same duties on Nilsson’s classic must own A Little Touch Of Schmilsson In The Night. It’s yet another wonderfully well-produced vocal album of standards that deserves a place in any serious record collection.

Oh, How I Miss You Tonight
Indiscreet
Remember
Together
The Song Is Ended

Originally, All Alone was going to called Come Waltz With Me. Although the title and the accompanying specially written title song were dropped before the album’s release, the record remained a stately collection of waltzes, arranged and conducted by Gordon Jenkins.

Out of all the arrangers Sinatra regularly worked with, Jenkins had the most overt classical influences in his writing, making him the perfect choice for the project. … it is one of the most intriguing records Sinatra recorded.

Divided between standards and relatively recent tunes, the most distinctive element of the album are the rich, neoclassical arrangements by Jenkins. Sinatra doesn’t strictly follow Jenkins’ intentions. Instead of playing close to the vest, he wrenches the emotions out of the songs. Most of the time, the results are quite moving, especially on the opening and closing Irving Berlin ballads, “All Alone” and “The Song Is Ended.” When the results aren’t quite as successful, they are still interesting, and the elegant, rumanative music makes All Alone a necessary listen for dedicated Sinatra fans.