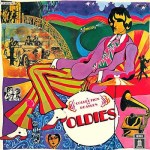 The choice of songs is outstanding, with just the right mix — almost as if you had compiled the thing yourself from all the best tunes from that era of The Beatles. They’re almost all favorites of mine, and I hope yours too.

This collection has a number of songs that are not on the original British LPs: the first three on side one for starters; also Can’t Buy Me Love, I Feel Fine; Bad Boy; Paperback Writer and I Want To Hold Your Hand.

This song will never be Demo Quality, but when it’s mastered correctly using low-distortion cutting equipment, as it seems to be on the better copies, it can actually sound quite good.

From Me to You
We Can Work It Out

One of the better test tracks for side one. The overall sound should be airy and spacious. On the best copies you’ll hear lots of ambience around the harmonium. This is also one of our favorite songs from Paul McCartney’s Unplugged, again with a wonderful sounding hamonium.

This track and Day Tripper were the first “double A sided single” The Beatles released, the two songs having been recorded during the Rubber Soul sessions. (Some good sessions those!)

When we did a shootout for Help! a little while back, we noticed that this song never sounded quite right on the Brit copies; the vocals had a hollow quality on every Brit copy we played. On this album it sounds MUCH closer to correct. The German Helps are still king for this song, but a good copy of this album is a close second.

One of the best sounding tracks on the album. When this song is right, it REALLY ROCKS — Demo Quality for sure.

The stereo mix of this song leaves much to be desired. We’re waiting to be blown away by a superb mono mix.

One of the toughest tracks to get right. On almost every copy you’ll have to deal with aggressive upper mids and at least a bit of distortion. It has some of that sound on the original album as well.

With a high-resolution copy you’ll really hear the texture of the strings of the octet (four violins, two cellos, and two violas) accompanying Paul. On an exceptional copy it’s pure magic. Paul’s voice should be rich and full with lots of ambience.

I Want to Hold Your Hand

A Collection of Beatles Oldies (subtitled But Goldies!) is a compilation album by the English rock band the Beatles. Released in the United Kingdom in December 1966, it features hit singles and other songs issued by the group between 1963 and 1966. The compilation served as a stopgap release to satisfy EMI’s demand for product during the Christmas period, since the Beatles had only begun recording their new studio album, Sgt. Pepper’s Lonely Hearts Club Band, late the previous month. It was the band’s first official greatest hits collection, although the Beatles had no involvement in the album.

The album’s preparation and release coincided with rumours in the press that the group were on the verge of splitting up. This speculation was encouraged by the band members’ high-profile individual activities since completing their final US tour, in late August 1966, and the announcement that, unlike in previous years, they would not be performing any concerts in Britain at the end of the year. The album cover is a painting combining contemporary psychedelic and op art themes and was commissioned by the band’s manager, Brian Epstein. To proponents of the Paul is Dead theory, the artwork offered the first clues relating to the alleged demise of Paul McCartney and his replacement in the Beatles by a lookalike, a scenario that is said to have taken place in November 1966.

A Collection of Beatles Oldies was the band’s first official greatest-hits set and their eighth official album release in Britain. A cover version of Larry Williams’ “Bad Boy” was the sole new track for the UK market. It had already been released in the United States, on the Capitol album Beatles VI in June 1965. Most of the other songs had been issued as singles, all of which had topped the national chart compiled by Record Retailer magazine.

The compilation provided the debut UK album release for the following singles tracks: “From Me to You”, “She Loves You”, “I Want to Hold Your Hand”, “I Feel Fine”, “Day Tripper”, “We Can Work It Out” and “Paperback Writer”. The two songs that had not been issued as UK singles (apart from “Bad Boy”), “Yesterday” and “Michelle”, had each been number 1 hits in other European countries overseen by EMI. “Yesterday” was also the title track of a March 1966 EP, which had topped Record Retailer’s EPs chart, and “Michelle” was one of the four Rubber Soul tracks included on the Nowhere Man EP in July that same year. Aside from their appearances on albums or as standalone singles, most of the songs on A Collection of Beatles Oldies had also been available on the various compilation EPs issued by EMI since 1963, one of which was the December 1965 release The Beatles’ Million Sellers.

Several tracks, including “I Want to Hold Your Hand”, “Day Tripper”, “We Can Work It Out” and “Paperback Writer”, were remixed in stereo for the album. The stereo mixing was carried out by George Martin, the Beatles’ producer, with none of the band members present, between 31 October and 10 November 1966.