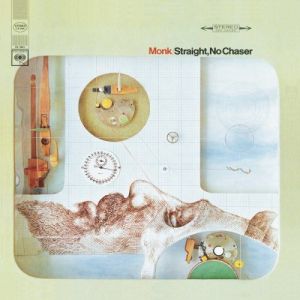 This vintage Columbia 360 Stereo pressing has the kind of Tubey Magical Midrange that modern records rarely even BEGIN to reproduce. Folks, that sound is gone and it sure isn’t showing signs of coming back. If you love hearing INTO a recording, actually being able to “see” the performers, and feeling as if you are sitting in the studio with Monk, this is the record for you. It’s what vintage all analog recordings are known for — this sound.

What the best sides of Straight, No Chaser have to offer is not hard to hear:

If you have full-range speakers, some of the qualities you may recognize in the sound of the piano on this vintage pressing are WEIGHT and WARMTH. The piano is not hard, brittle or tinkly. Instead, the best copies show you a wonderfully full-bodied, warm, rich, smooth piano, one which sounds remarkably like the ones we’ve all heard countless times in piano bars and restaurants.

Rudy Van Gelder, eat your heart out. This is the piano sound Rudy never quite managed to pull off. Some say it’s the crappy workhorse piano he had set up in his studio. Others say it was just poorly miked. Rather than speculating on something we know little about (good pianos and their miking) let’s just say that Columbia had the piano, the room and the mics to do it right as you can easily hear on this very record.

What We’re Listening For on Straight, No Chaser

Locomotive
I Didn’t Know About You
Straight, No Chaser

This is the sixth studio album cut by Thelonious Monk under the production/direction of Teo Macero for Columbia and as such should not be confused with the original motion picture soundtrack to the 1988 film of the same name. The band featured here includes: Monk (piano), Charlie Rouse (tenor sax), Ben Riley (drums), and Larry Gales (bass). This would be the final quartet Monk would assemble to record with in the studio. While far from being somber, this unit retained a mature flavor which would likewise place Monk’s solos in a completely new context.

Thelonious Monk’s Straight, No Chaser is the pinnacle of his recordings for Columbia Records. It was his eighth for the label, and there would be only two more official releases before Monk and Columbia parted ways.

By this point in 1967, he and his bandmates, tenor saxophonist Charlie Rouse, bassist Larry Gales, and drummer Ben Riley, had been playing together for a number of years and this showed in the near-telepathic way they played with and off each other. It also meant that they knew Monk’s music inside and out — no small feat — so they could improvise at will.

Much of this album was of older Monk tunes, the title coming from one of his most widely recorded and praised compositions. Not that that was a huge surprise as he tended to recycle his music over and over. But what would for almost anyone else have become tediously repetitious as the years rolled by, for Monk, the inveterate innovator, it managed to always sound fresh — as if he had written the tunes just for that particular session.