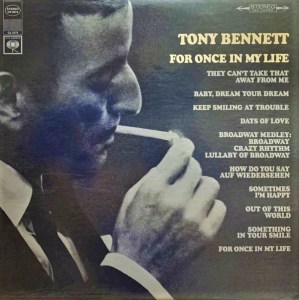 What We’re Listening For on For Once In My Life

They Can’t Take That Away From Me
Something In Your Smile
Days Of Love
Broadway Medley:
– Broadway
– Crazy Rhythm
– Lullaby Of Broadway
For Once In My Life

Those of you who think of “For Once In My Life” as a Stevie Wonder song, reconsider. True, Wonder took it to #2 in 1968, but Tony Bennett’s ballad version was a pop chart entry (his last) and an Easy Listening Top 10 more than a year earlier. On the accompanying album Bennett made his by-now usual selections of standards (“They Can’t Take That Away From Me”), Broadway and Hollywood material, and choices from the catalogs of songwriter favorites such as Leslie Bricusse and Cy Coleman.