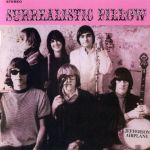 The overall sound is rich, warm, and sweet, with all the tubey magic you could hope for. The clarity and transparency goes far beyond what you’d hear on an average copy, and the highs are extended and silky sweet. After playing a stack of copies that were full of compressor distortion, we couldn’t believe how clean this one was cut.

The bass is deep and well-defined with a meaty quality that helps the music really rock. Plastic Fantastic Lover sounds UNBELIEVABLY GOOD with breathy vocals and lots of extension up top.

No Other Game In Town

If you love this album as much as we do, you’ll understand why we went to all this trouble to find great pressings. There is NO OTHER GAME IN TOWN for this album — the Sundazed Mono pressing can’t handle the rock songs, and I’ve never been a fan of the DCC.