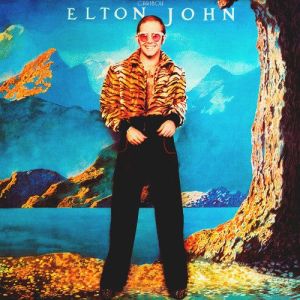 Not the most consistent of Elton’s albums in the ’70s, but the best tracks — Don’t Let the Sun Go Down on Me and The Bitch Is Back spring to mind — are killer, right up there with the best work the man was doing at the time.

This Super Hot Stamper original British DJM pressing has some of the best sound we have ever heard on Caribou. There’s a good reason you’ve practically never seen this album for sale on our site. In fact there are quite a number of good reasons.

The first one is bad vinyl — most DJM pressings of Caribou are just too noisy to sell. They can look perfectly mint and play noisy as hell; it’s not abuse, it’s bad vinyl. (Empty Sky is the same way; out and out bad vinyl, full of noise, grit and grain.)

The second problem is bad sound. Whether it’s bad mastering or bad vinyl incapable of holding onto good mastering, no one can say. Since so many copies were pressed of this monster Number One album (topping the charts on both sides of the Atlantic), perhaps they pressed a few too many after the stampers were worn out.

Or pulled too many stampers off the mother.

Or made too many stampers from the father.

Or used crap vinyl right from the start.

Of course there’s not an iota of evidence to back up any of these assertions, but I just thought I would throw it out there as a topic for speculation. (Have you noticed how much audiophiles and audiophile reviewers love to talk about things that they have no empirical evidence for one way or the other? Very little of that sort of thing can be found on our site. We like to stick to the sound of the records we’ve played and leave most of the “reasoning” about the sound to others.)

What to Listen For – Dynamic Choruses (WTLF)

The choruses on I’ve Seen the Saucers, the leadoff track on side two, get shockingly big and loud like practically no other Elton John record we know. Watch your levels!

Speaking of dynamics. listen to how quiet the intro to Don’t Let the Sun Go Down on Me is. We love the dynamic buildup of the song, but it also unfortunately means that the beginning of the track will have audible surface issues until the volume gets loud enough to mask them.

The overall sound of the album can be excellent — lively, with presence, clarity, transparency, not to mention plenty of whomp in the rockers — just exactly what you want from an Elton John album.

The sound of the piano on the best copies is ROTM — Right On The Money. This is a critical element of the recording on any of Elton’s albums. When the piano is wrong: thin, or lost in the mix because of a lack of transparency, or missing harmonics because of a rolled off top end; whatever the reason, if that centerpiece instrument goes south, the rest of the sound, not to mention the music, falls apart right along with it.

Not surprisingly, the domestic versions of the album are made from dub tapes and sound like it. Don’t waste your money.