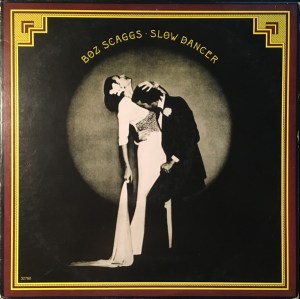 This is an album of wonderful white soul music. As a bonus, it also happens to be very well recorded. The problem we ran into on copy after copy was a brighter than ideal tonal balance, hard vocals and, on those copies that don’t extend fully on the top and bottom, a somewhat squashed, peaky midrange.

The better copies deal with those issues and, for the most part solve them. There’s lovely texture to the strings, plenty of punchy rich bass, and all the elements of the recording are properly balanced, something they still knew how to do back in the all analog days of 1974, I’m glad to report.

Background Singers You Can “See”

What We’re Listening For on Slow Dancer

While Silk Degrees is often touted as Scaggs’ best ’70s album — based largely upon the chart success of “Lowdown” — Slow Dancer features just as many catchy melodic tunes that meld a kind of boogie pub rock with an organic urban soul. Produced by Motown regular Johnny Bristol, Scaggs delivers some of his best performances on the Bristol-penned track “Pain of Love” and the Neil Young meets Marvin Gaye ballad “Sail on White Moon.”