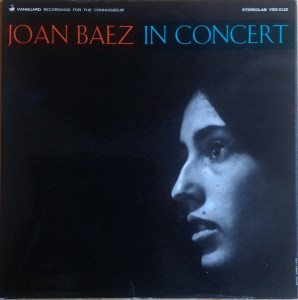 Need a refresher course in Tubey Magic after playing too many modern recordings or remasterings? These Vanguard pressings are overflowing with it. Rich, smooth, sweet, full of ambience, dead-on correct tonality — everything that we listen for in a great record is here.

This vintage stereo pressing has the kind of Midrange Magic that modern records barely begin to reproduce. Folks, that sound is gone and it ain’t coming back. If you love hearing INTO a recording, actually being able to “see” the performers, and feeling as if you are sitting in the audience, this is the record for you. It’s what vintage All Tube Analog recordings are known for — this sound.

What the best sides of Joan Baez In Concert have to offer is not hard to hear:

What We’re Listening For on Joan Baez In Concert

Originally released in 1962, In Concert, Pt. 1 captures the undisputed queen of folk music at the onset of her fabled career… Though Baez was reportedly suffering from stage fright at the time of these recordings, which were cobbled from the fall of 1961 to the spring of 1962, her delivery is crystal clear and confident. The exhaustive selection of material represents her diverse influences, most notably African tradition (“Kumbaya”), gospel (“Gospel Ship”), negro spiritual (“My Lord What a Morning”), West African (“Danger Waters”), Brazilian (“Ate Amanha,” which is sung in Portuguese), and blues (“Babe I’m Gonna Leave You”), Baez’s performances still retain freshness and vitality after four decades.

Cisco Gets It Backwards As Usual

Cisco reissued the record more than a decade ago. They wrote:

Released in 1962 and following closely on the heels of her second self-titled debut LP, Joan Baez In Concert was living proof that the greatest folk singer in the world was also a charismatic performer. A source of repertoire for performers world-wide (perhaps even Led Zeppelin) Joan Baez In Concert is one of the 60’s most essential albums.

Those familiar with records such as Reunion at Carnegie Hall by the Weavers and Belafonte at Carnegie Hall will find this record is in the same sonic class. Cut from the original master tape, Cisco’s new pressing reveals the clarity and delicate ambient cues that original pressings only suggested. The listening seat is front-row center. Whether you are a dedicated Joan Baez fan or simply want to bask in the glow of a live performance happening between your speakers, the Cisco reissue of Joan Baez In Concert should be on your short list of must-have LPs.

Of course the writer has it exactly backwards — it’s the original that has the “clarity and delicate ambient clues” that are missing from the Heavy Vinyl reissue, not the other way around.