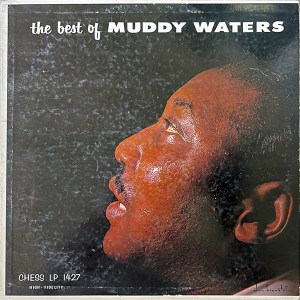 Don’t be put off by the Best Of designation in the title. ALL these songs were recorded as individual tracks to be released on individual discs. Muddy Waters would go into the studio and cut a few “sides,” the best of which would be approved for distribution. There was no concept in those days of an “album.” Albums were basically just collections of songs, and that means lots of filler. What’s great about this pressing is that it gives you all the classics with none of the filler.

Having done this for so long, we understand and appreciate that rich, full, solid, Tubey Magical sound is key to the presentation of this primarily vocal music. We rate these qualities higher than others we might be listening for (e.g., bass definition, soundstage, depth, etc.). The music is not so much about the details in the recording, but rather in trying to recreate a solid, palpable, real Muddy Waters singing live in your listening room. The best copies have an uncanny way of doing just that.

If you exclusively play modern repressings of older recordings (this one is now 61 years old), I can say without fear of contradiction that you have never heard this kind of sound on vinyl. Old records have it — not often, and certainly not always — but less than one out of 100 new records do, if our experience with the hundreds we’ve played can serve as a guide.

Blues from the Master

What the best sides of this 1957 release have to offer is not hard to hear:

No doubt there’s more but we hope that should do for starters. Playing the record is the only way to hear all of the above, and playing the best pressings against a pile of other copies under rigorously controlled conditions is the only way to find a pressing that sounds as good as this one does.

The material this artist cut for Chess during this period is nothing short of a blues revelation. There has never been anything quite like it, before or after, and when one has heard Muddy Waters from this period, one has simply heard the best blues has to offer. This collection was the first “best of” Chess created, obviously mindful that what they had on their hands was nothing less than a tray of gold. The earliest pieces, such as “Louisiana Blues,” are just marvelous, the country blues slide guitar augmented just so slightly by string bass, the harmonica of Little Walter, and the barest trace of percussion.

Rhythmically, these performances are flawless and drenched with the feel as if they were slabs of chicken that had spent the day simmering in a jerk sauce. From there, one hears the classic Chicago blues combo sound emerging, which it does with great glory on tracks such as “Standing Around Crying.” Yet with all the more extensive material that has been released of this artist since the late 50s, it is hard to conceive of why a consumer looking for Waters would settle for this collection. It is not a question of “less is more,” as there is great consistency to the Waters discography from this period; listeners who enjoy this material will want more, more, more.