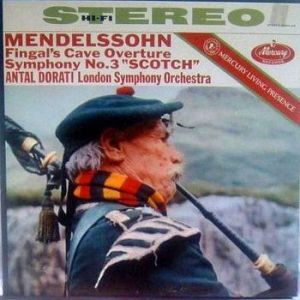 The sound of this Super Hot Stamper side one came as a bit of a surprise to us. It’s so BIG and RICH — this is a Mercury? It sounds like a good Decca/ London.

It’s actually instead a bit of a hybrid. The recording takes place in a famous London hall with superb acoustics (Walthamstow Town Hall) in which the Mercury recording team merely set up their usual three mics and recorded to half-inch tape. Gone is the dryness and upper-midrange nasality of so many Mercury’s; no doubt that sound was caused in large part by the halls in which they were recorded.

This is some Tubey Magical Decca orchestral sound from 1956, here on a Colorback early Mercury pressing. Go figure.

With a grade of A++ this side was KILLER. A little smear but so rich, musical and enjoyable you will find yourself lost in the performance. The London Symphony is hard to beat.

A+ for the fourth movement of the symphony, with more smear than we heard on side one. Fingal’s Cave Overture sounds better though, more like side one. We gave it an A++ grade.

This is a truly wonderful copy of one of the rarest and best Mercury recordings.

Wikipedia’s Entry for the “Scotch” Symphony