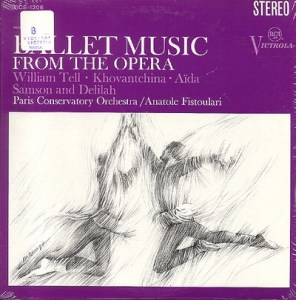 Better than Super Hot Stamper sound on side one of this lovely Victrola reissue from 1960, one of the best in the entire series. Pay attention to the brass — yes, it may have some tubey smear, but listen to how HUGE and POWERFUL it is! Drop the needle on the first side and watch (or listen) as the sound comes jumping out of your speakers.

Modern records can’t do that.

These Decca-derived recordings are highly sought after, and with good reason. It’s hard to imagine a more wonderful audiophile disc, both in terms of the program and the quality of the sound.

The original RCA (LSC 2400) sells for many, many hundreds of dollars in clean condition and may not have especially good sound, if our experience is any guide. Some of the ones we’ve played have been quite shrill (this side two has some of that sound in fact). In other words, you could easily spend a ton of money on one and end up with a bad sounding collector piece destined to sit on your shelf for years between playings.

Or you could buy the Classic 180g reissue and end up with one of the biggest disasters in the history of remastering. More about that later.

Even though the album was recorded by Decca, it’s a superb example of Living Stereo Tubey Magic at its best. It is our belief that there will never be a reissue of this recording that even remotely captures the energy, transparency, sweetness and richness of the sound of this copy.

And the hall is HUGE — so spacious and three-dimensional it’s almost shocking, especially if you’ve been playing the kind of dry, multi-miked modern recordings that the ’70s ushered in for London and RCA. (EMI is super spacious but much of that space is weird, coming from out of phase back channels folded in to the stereo mix. And so often mid-hall and distant. Not our sound, sorry.)

A++ to A+++, BIG, LIVELY, and so DYNAMIC, just the way we like it! Yes, there is some tube smear audible on the brass, and the bass is not quite all there, but this side had the most extended top of any we heard, with the lovely bells and other percussive elements benefitting immensely.

A+ to A++, with mostly sweet and richly textured strings. Some compression, smear, congestion and shrillness is evident in the louder passages, always a problem with these vintage recordings and pressings. Still, for the most part this side holds up very well.

Act III of the William Tell is played with breathtaking orchestral vigor and skill. What a showpiece for Fistoulari and The Paris Conservatory! I would not expect to hear a better performance, not in this lifetime anyway.

Classic Records — Let’s Try and Forget The Sound. This Means You, HP

Classic Records, as expected, ruined this album. Their version is dramatically more smeared and low-rez than this pressing, with almost none of the sweetness, richness and ambience that the best RCA pressings have in such abundance. In fact their pressing is just plain awful, like most of the classical recordings they remastered, and should be avoided at any price. If you’re tempted to pick one up for a few bucks to hear how badly mastered their version is, go for it. If you actually want a record to play for enjoyment, don’t bother; you’ll be wasting your money.

Most audiophiles (including, apparently, audiophile record reviewers) have never heard a classical recording of this quality. If they had Classic Records would have gone out of business immediately after producing their first three Living Stereo titles, all of which were dreadful and labeled as such by us upon their release in 1994.

I’m not sure why the rest of the audiophile community was so easily fooled (HP, how could you?), but I can honestly say that we certainly weren’t, at least when it came to their classical releases. (We admit to having made plenty of mistaken judgments about their jazz and rock, and we have the We Was Wrong entries to prove it.)

And the fact that so many of them are currently on the TAS List is a sad comment on how far the mighty have fallen. Can the TAS List still have any value when it contains so many mediocre pressings?