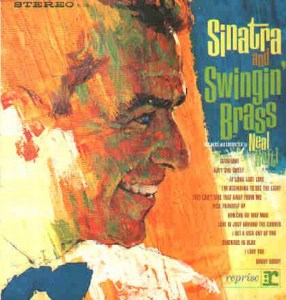 This nearly White Hot side two showed us just how good sounding this original Tri-Color Reprise original pressing could sound. Don’t get me wrong; they have their share of problems, but the better copies are as musical and enjoyable as many of the best Capitol releases from Sinatra’s prime period. (Most of which sound dreadful by the way, due to Capitol’s awful mastering. Just play an early Beatles album to hear what I’m talking about.)

This very side two was the most tonally correct and musically enjoyable of any second side we played. We call it A++ to A+++. (If we could find ten more clean originals we could probably come up with a Triple Plus side two, but considering how many years it took us to find the copies we had on hand to do our shootout, that is probably not in the cards.)

Check out the great material on the album, with lively, fun (even goofy) arrangements by Neil Hefti: Goody Goody; They Can’t Take That Away from Me; I’m Beginning to See the Light; I Get a Kick Out of You; Tangerine; Serenade in Blue. This is the kind of material Sinatra can really sink his teeth into!

A++ to A+++, present and BIG as life, just the way we like our Sinatra records. The sound is rich (for a change) and suffers much less from the nasal quality heard on so many copies. The bass is excellent here too.

A+ to A++, big and open, with breathy vocals. This side has some of the hardness and thinness that we heard on virtually every copy we played, but it’s more under control here. The orchestra sounds quite good on this side; love those wacky arrangements.

If you don’t like at least some reverb on your Sinatra vocals this album may not be for you. The standard recording approach for Male Vocals in the ’50s and ’60s was to add reverb to them and plenty of it. Play any Nat King Cole record from the era to hear what I mean. You just have to accept it for what it is: a fact.

There sure aren’t going to be any copies coming along any time soon without the added echo. If anything, they add EVEN MORE reverb to the incredibly bad sounding Sinatra compact discs they’ve been reissuing for the last fifteen or twenty years. Complete with noise-gating, compression and all the rest — nice! There is no way any Sinatra record ever sounded like one of these awful CDs but that has not inhibited those issuing them.

Sinatra and Swingin’ Brass, a collection of brash, bold up-tempo numbers, followed the all-ballads effort Sinatra and Strings. Working with Neal Hefti, Sinatra turned in a robust, energetic performance, which was infectious even when his voice was showing signs of wear — he was suffering from a cold during the sessions. The record captures the spirit of the Rat Pack era nearly as well as Ring-a-Ding Ding!