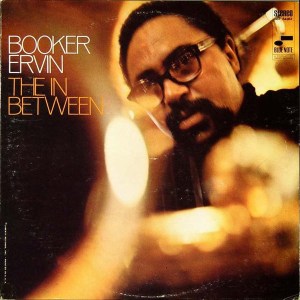 What the best sides of The In Between have to offer is not hard to hear:

What We’re Listening For on The In Between

The In Between
The Muse
Mour

Booker Ervin headed to Blue Note in 1968 for The In Between, a record that found him continuing in the vein of his later Prestige sessions. Supported by trumpeter Richard Williams, pianist Bobby Few, bassist Cevera Jeffries and drummer Lennie McBrowne, Ervin created an album that pushed the boundaries of hard bop.

Every song on The In Between is an Ervin original designed to challenge the musicians. The music rarely reaches avant-garde territory — instead, it’s edgy, volatile hard bop that comes from the mind as much as the soul. Appropriately, Ervin balances his full-bodied tone with a forceful, aggressive attack that even sounds restless on the slower numbers. The result is a satisfying, cerebral set of adventurous hard bop that finds Booker Ervin at a creative peak.