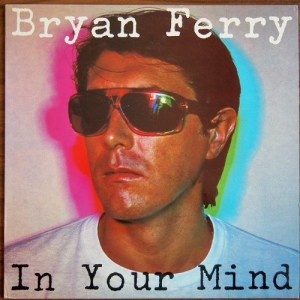 This British original pressing caused me a great deal of consternation. I’ve always been a big fan of this album — so much so that I even have the CD of it in my car — and I was under the impression that the sound was quite good. But playing a few British originals like this one caused me to have my doubts. The sound was aggressive and hard. I suspected the absolute phase might be reversed, and sure enough it was. But even after correcting for the improper polarity the sound is not what I would have hoped for. It’s a bit “grungy” and lacks the extreme highs that would sweeten the overall presentation.

So if you can put up with less than state of the art sound you may find yourself thoroughly enjoying this one. Side one rocks hard from start to finish, more than any other Ferry album.

In Your Mind still burns more fiercely than both the later solo and group albums, at least on certain tracks – like Siren, it balances between rockier and smoother paths, most often favoring the former. Ferry’s lyrics remain in his own realm of intelligent, romantic dissipation, and are some of his best efforts.