Reviews and Commentaries for the Music of Barney Kessel 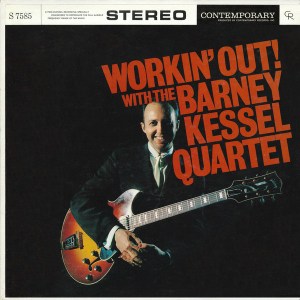 This is a 2-pack set of original pressings that gives you wonderful sound for both sides of this great Contemporary album, A++ for the first and A+++ for the second. There is a catch, however, one that won’t bother some of you at all but will drive a few of you crazy: the side one pressing is in mono and the side two is in stereo. All that mattered to us was that they both sounded great, and a quick flip to the not-so-hot side of either pressing will quickly show you why we paired these up.

I imagine there are both mono and stereo copies that sound great on both sides, but we sure haven’t been able to find one! Obviously this is not an easy record to come by these days.

Side one is clean, clear and lively with a punchy bottom end. It’s surprisingly open and transparent for a mono pressing. We graded it A++/

Side two was killer, A+++ all the way. It’s full-bodied and lively with superb clarity.

One more catch — there’s a mark on side two that plays for about a quarter inch of the first song. That still leaves you plenty of great music and great sound, and we’ll keep the price very low on this set to help you get past it. We would have asked double this price for these grades on one record with no mark.

For this lesser-known effort by Barney Kessel, the guitarist is heard shortly after he decided to forego his career in the studios and try to make a living playing jazz full-time. He formed a quartet that also included three now-obscure players: Marvin Jenkins on piano and occasional flute, bassist Jerry Good, and drummer Stan Popper. Kessel plays well during a program that is highlighted by Jenkins’ “Good Li’l Man,” “When Johnny Comes Marching Home,” Ahmad Jamal’s “New Rhumba,” and the guitarist’s own “Pedal Point.” Nothing all that unusual occurs, but the music is fine modern mainstream jazz from the early ’60s.