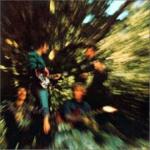 This is the first White Hot Stamper copy of Bayou Country to ever hit the site. We were shocked at how good this one sounds — on both sides — compared to the copies we’ve heard over the years. It is TOUGH to find a pressing of this album that didn’t turn out bright and edgy, but here’s one that was worth the headache of playing a ton of mediocre copies. Seriously, we played a huge stack of these and most had us running for cover.

Man, the average copy of this album is an unmitigated disaster. Let’s start with the vocals. I’m not sure who’s idea it was to have John Fogerty’s vocals sound as if they were recorded via telephone, but every copy we played had an edgy quality to Fogerty’s voice. On some copies the edge is bad enough to render the copy completely worthless sonically. Who can sit and listen to a record that makes you cringe every time the singer says anything? Not us.

Furthermore, most copies are badly congested and far from transparent. After dropping the needle on the first few copies and hearing the muddy music and gritty vocals we nearly gave up, but I’m glad we stuck to it long enough to find a few copies that did a good job conveying this classic music.

After playing a handful of copies we started to identify what qualities we could hope for in a Hot Stamper pressing. It was only then that we decided to take John Fogerty’s advice and, uh, keep on chooglin’.We realized that the vocals are never going to sound amazing, but they don’t need to sound irritating either. We realized the stunning transparency was not in the cards, but that on the better copies you can actually pick out the various musicians and make sense of their contributions. And while you’re just not going to get note-like bass from this album, you can certainly find copies that offer SOME definition to the bottom end. If you’ve got a big stack of copies and an excellent cleaning regiment, you just might be able to find a copy that performed reasonably well in all of these areas. And in the end, that’s exactly what we managed to do. It wasn’t easy, and you won’t be using this record of these to demo your stereo, but if you love this music as much as we do then we imagine you’ll enjoy hearing Bayou Country sound this good.

Side one was incredibly tubey magical with lots of energy and surprising clarity, which you can really hear on the clean guitar transients. The sound is big and open with real weight to the bottom. The top end has natural extension instead of the brightened up sound you might be familiar with for this album. Born On The Bayou and Bootleg both sound great — I guarantee you’ve never heard ’em sound any better or your money back.

Side two earned A++ honors with excellent presence and energy. It’s a very transparent side two; you can even pick out the piano in Good Golly Miss Molly, which is hardly even audible on most pressings. The vocals are neither edgy nor gritty, and the top end is smoother than what you get on the typical copy.

Creedence fans, it’s been over three years since we’ve had a Hot Stamper copy of this album on the site, so unless you’re a very patient person you won’t want to miss out on this one!

Opening slowly with the dark, swampy “Born on the Bayou,” Bayou Country reveals an assured Creedence Clearwater Revival, a band that has found its voice between their first and second album… “Born on the Bayou” is a magnificent piece of swamp-rock, “Penthouse Pauper” is a first-rate rocker with the angry undertow apparent on “Porterville” and “Bootleg” is a minor masterpiece, thanks to its tough acoustic foundation, sterling guitar work, and clever story.

All the songs add up to a superb statement of purpose, a record that captures Creedence Clearwater Revival’s muscular, spare, deceptively simple sound as an evocative portrait of America.