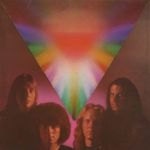 This listing is for our 2012 Shootout Winner. In it we discussed our 2007 breakthrough.

Around 2007 I stumbled upon the Hot Stampers for this record, purely by accident of course, there’s almost no other way to do it, and was shocked — shocked — to actually hear INTO the soundfield of the recording for the first time in my life, this after having played copy after frustratingly-opaque copy decades.

Yes, the stereo got better and that helped a lot. Everything else we talk about helped too. But ultimately it came down to this: I had to find the right copy of the record.

Without the right record it doesn’t matter how good your stereo is, you still won’t have good sound. Either the playback source has it or it doesn’t. It’s not what’s on the master tape that matters; it’s what’s on the record.

This SUPERB WHITE HOT STAMPER copy is our overall winner from the recent huge Hot Stamper shootout we did for Ambrosia’s second — and second best — album. Friends, it’s been a long time coming but, judging by this copy and the others which fared well, it was worth it. We LOVE this music.

Ambrosia is one of the few groups that has mastered the technique of being both far-out galactic in scope of vision and mainstream AM commercial in execution… There is an unusual dreamlike quality that pervades its work. The songs seem to be reaching the listener direct from some strange and beautiful realm of the unconscious. It is an experience rare in popular music today, or at any time.

We here present one of the best sounding copies for Somewhere I’ve Never Travelled we have ever played. Side one rated A+++, As Good As It Gets, with a side two that was not far behind at A++. From beginning to end this pressing is KILLER.

A+++, super dynamic and high-rez. It’s a rare copy that manages to have real presence and top end without getting edgy, but this one nails that balance like none other! The bass is big, solid and punchy and the energy is off the charts, making this one of the best side ones we’ve ever heard. As Good As It Gets, White Hot Stamper material all the way!

A++, rich and smooth with the kind of musical, Tubey Magical sound we love around here! It may not have all the top end or transparency of side one, but it absolutely destroys the typical pressing.

This may seem pretty obvious, but how many audiophiles do you know who own dozens of pressings of the same album and are still hunting around for more? I’ve been buying multiple copies of my favorite albums for decades, but I’m obsessive. And, since about 1987, with the advent of Better Records I’ve had an outlet for the pressings I chose not to keep.

A few audiophile friends have multiple copies, but most audiophiles I know usually stop after one, at most two or three, and they often make the worst mistake one could ever make: they buy an audiophile pressing and figure that that’sthe one to keep, tossing out their original, or never bothering to buy an original in the first place. (And lest the above be mistaken for an endorsement of original pressings as opposed to reissues, let me state clearly that many, many reissues are sonically superior to the originals.)

Those of you who take the time to read our Hot Stamper commentary, whether you buy any of our records or not, no doubt know better. At least I hope you do. The only way to understand this Hot Stamper thing is to hear it for yourself, and that means having multiple copies of your favorite albums, cleaning them all up and shooting them all out on a good stereo. Nobody, but nobody, who takes the time to perform that little exercise can fail to hear exactly what we are on about.

Or you can join the other 99% of the audiophiles in the world, the ones who don’t know just how dramatic pressing variations for records and CDs can truly be. Some very large percentage of that group also doesn’t want to know about any such pressing variations and will happily supply you with all sorts of specious reasoning as to why such variations can’t really amount to much — this without ever doing a single shootout!.

The following comments are mostly taken from the listing for the first album with a few minor alterations. The two albums have much in common.