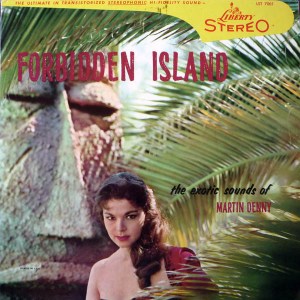 Picture yourself on a beautiful South Pacific island. Now imagine you’re in a jazz bar on the mainland. Combine the two moods into one glorious sound and you have the music of Martin Denny!

A+++ White Hot Stamper sound, the best Denny record we have ever played! It’s so clear and transparent, your speakers just disappear in the huge space your listening room has now become. Zero distortion, zero smear, an extended top end — no other copy could touch it!

This is the sound of Tubey Magic. No recordings will ever be made like this again, and no CD will ever capture what is in the grooves of this record.

A++ to A+++, very close to side one sonically but just missing some of that side’s amazingly extended top end. We dropped the grade for this side by one half grade. Hard to imagine to better sides ending up on one LP.

Denny recorded his third album shortly after suffering a key loss in his ranks with the. defection of vibraphonist Arthur Lyman, who left to start his own successful solo career. Lyman also recruited a rhythm section that had formerly worked with Denny, who carried on by replacing him with vibraphonist Julius Wechter. At any rate, Martin’s sound didn’t change much, mixing island sounds, easy listening, and Asian/world music accents. This has compositions by Denny, Wechter, and Les Baxter, as well as some exoticized standards.