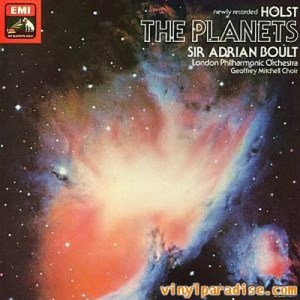 This 1967 recording of the work has one very special quality that’s not often heard on classical vinyl — THE FEEL OF LIVE MUSIC. This is also something you will not often hear us say about EMI recordings from the late ’60s and ’70s.

Unlike HP and most audiophiles in the ’70s, we find that EMI’s recordings leave a lot to be desired, lacking in warmth, with a thin, sour, overly clear presentation. Great for muddy equipment but bad news on higher resolution modern rigs.

Super Hot Stampers on both sides means this Planets can take on any pressing you have of the piece and show you what you’ve been missing out on all these years.

There are a LOT of bad Planets out there. With its monstrously large orchestra and chorus, it’s not an easy work to capture on tape.

The 1967 reading of the work by Boult is one of my favorites, and is widely considered to be the best of his four recorded performances. What you get with this copy is the BEST sound we have ever heard for this performance.

With Super Hot Stamper sound you get an especially BIG and powerful climax to Mars. There before you is a HUGE roomful of musicians really blasting away. The London Phil is one of the few orchestras that can pull off this kind of excitement and energy. Side one is transparent and tonally correct as well as lively and dynamic. If it had a little more weight down low it would have earned our highest Hot Stamper grade. We have never heard a better copy.

Just as good as side one! So natural sounding, it really reminds me of live music. The organ is huge, just the way a real organ in a concert hall is.

And the vinyl is quiet!

If you’ve ever heard the domestic Angel LP, you might be inclined to think the EMI is a bad recording, but that’s Angel’s fault – not EMI’s. The EMI pressing here is wonderful. They still had it together in the late ’60s.

Mehta just does not find in the various movements the special qualities that allow the music to be more than a mere series of effects. He (almost) never finds the music underpinning the notes. His Jupiter and Mars may be decent, even quite good, but the rest are just too mechanical and stilted in comparison to Boult’s (and Steinberg’s) more lyrical approach.

This magnificent work – The Planets – remains fresh forever and can be listened to over and over without wearing out, comparable in this quality only to Rimsky-Korsakov’s Scheherazade.

Holst borrowed generously from Beethoven, Haydn, Wagner, Debussy, Liszt, Bruckner, Elgar, Sibelius and Rossini, merging these influences with consummate skill to create a sense of grandeur and universality. This is one of the earliest and most successful works to treat a large orchestra as a collection of small ensembles, with percussion, the harp, and certain repeated rhythmic figures unifying the movements into the perception of a whole.

Holst has captured perfectly the fascination of astrology with its grand vision of heavenly phenomena on the hugest scale mirrored in the everyday activities of human beings.

Wikipedia Planets The Planets Op. 32[1] is a seven-movement orchestral suite by the English composer Gustav Holst, written between 1914 and 1916. The Planets is the most-performed composition by an English composer.[1] Its first complete public performance was on October 10, 1918 in Birmingham, with Appleby Matthews conducting. However, an earlier invitation-only premiere occurred during World War I on September 29, 1918, in the Queen’s Hall in London, conducted by Adrian Boult[2].

The elaborate score of The Planets produces unusual, complex sounds by using some unique instruments[3] and multiples of instruments in the large orchestra (like Mahler’s Sixth of 1906), such as three oboes, three bassoons, two piccolos, two harps, bass oboe, two timpani players, glockenspiel, celesta, xylophone, tubular bells, and organ (see “Instrumentation” below). Holst had been influenced by Stravinsky,[4] who used four oboes and four bassoons in his Rite of Spring (1912-1913) and by Schoenberg’s 1909 composition titled “Five Pieces for Orchestra”.[4]

The concept of the work is astrological[5] rather than astronomical (which is why Earth is not included). The idea was suggested to Holst by Clifford Bax, who introduced him to astrology when the two were amongst a small group of English artists holidaying in Majorca in the spring of 1913; Holst became quite a devotee of the subject, and liked to cast friends’ horoscopes for fun.[5][6] Each movement is intended to convey ideas and emotions associated with the human psyche, not the Roman deities. Holst also used Alan Leo’s[5] book What is a Horoscope? as a springboard for his own ideas, as well as for the subtitles (i.e., “The Bringer of…”) for the movements.

The Planets as a work in progress was originally scored for a piano duet, except for “Neptune,” which was scored for a single organ, as Holst believed that the sound of the piano was too harsh for a world as mysterious and distant as Neptune. Holst then scored the suite for a large orchestra and it was in this incarnation that it became enormously popular. Holst’s use of orchestration was very imaginative and colourful, showing the influence of Schoenberg[5], and other continental composers of the day rather than his English predecessors. The influence of Igor Stravinsky’s The Firebird, Petrushka, and The Rite of Spring is especially notable. These new (at least for British audiences) sonorities helped make the suite an instant success.

During the last weeks of World War I, the private orchestral premiere of The Planets suite was held at rather short notice on September 29, 1918 in the Queen’s Hall. It was hastily rehearsed; the musicians first saw the complicated music only two hours before the performance. Despite this auspicious venue, it was a comparably intimate affair, attended by around 250 invited associates, with a chamber orchestra and choir conducted by Boult at the request of his friends—Holst, and financial backer and fellow composer Balfour Gardiner[1][6]. An ecstatically-received public concert was given a few weeks later while Holst was overseas, but out of the seven movements, only five were played[6]. After the war, the first complete public performance occurred on October 10, 1920, in Birmingham. Holst himself conducted the London Symphony Orchestra performance of The Planets in 1926.

Another possibility, this time from an astronomical perspective, is that the first three movements, representing the inner terrestrial planets, are ordered according to their decreasing distance from the Sun. The remaining movements, representing the gas giants that lie beyond the asteroid belt, are ordered by increasing distance from the Sun. Critic David Hurwitz offers an alternative explanation for the piece’s structure: that “Jupiter” is the centrepoint of the suite and that the movements on either side are in mirror images. Thus “Mars” involves motion and “Neptune” is static; “Venus” is sublime while “Uranus” is vulgar, and “Mercury” is light and scherzando while “Saturn” is heavy and plodding. (This hypothesis is lent credence by the fact that the two outer movements, “Mars” and “Neptune,” are both written in rather unusual quintuple meter.)

“Neptune” was the first piece of music to have a fade-out ending. Holst stipulates that the women’s choruses are “to be placed in an adjoining room, the door of which is to be left open until the last bar of the piece, when it is to be slowly and silently closed”, and that the final bar (scored for choruses alone) is “to be repeated until the sound is lost in the distance”.[11] Although commonplace today, the effect bewitched audiences in the era before widespread recorded sound – after the initial 1918 run-through, Holst’s daughter Imogen (in addition to watching the charwomen dancing in the aisles during “Jupiter”) remarked that the ending was “unforgettable, with its hidden chorus of women’s voices growing fainter and fainter… until the imagination knew no difference between sound and silence”.